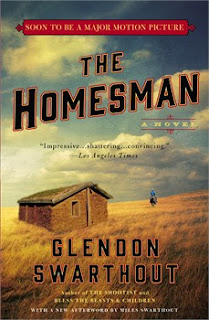 1850s, Oklahoma Territory. Away from civilization in the West of the continent settlers live in harsh conditions. They are entirely dependent on crop and weather and don’t even think about socialization. Men work in the fields, and women are seen as a pair of hands, which should serve a man, makes his life bearable, and bear children - the more, the better.

After a devastating winter four women near the town of Loup go mad. Naturally, each of them becomes a burden for men and their households. Experience of the previous year showed that these ill women are best load on wagon and escort them to a sanitarium in the East near the Missouri River, and there women will be taken care of. This scheme worked the year before and will be repeated this year, when novel events takes place.

The procedure is that husbands of crazy women draw lots and the loser becomes the carrier (homesman from the title), and the remaining husbands provide wagon, horses, mules and provisions. Then homesman for a few weeks carry the women to a sanitarium, hands patients and their documents over to a sanitarium, and then homesman can return home.

Nevertheless, the procedure is violated by one of the men, stubborn type, who just send his wife out of the house, and already has sheltered himself with another girl for a wife. He does not agree to participate in the draw. Then instead of him, a local teacher and spinster, 31-year-old Mary Bee Cuddy agrees to participate in the draw. This brave woman are very devout, rich (inherited from herfather), but lonely - a man whom she had once made a proposal, refused and went to look for his wife in the other region.

The Homesman won several awards for Best Western, but it is only nominally western. In fact it is historical fiction of high quality, with a solid amount of action. Story diversity in Westerns is very limited - if not about cowboys, then about Indians - so much depends in such cases on author’s originality. The Homesman is unforgettable because it contains few surprises, a small group of noncliched characters and entertaining beginning. Novels about the long journeys on the wild territory were plenty, but how many books have we read about the madwomen of mid-XIX century?

The first third of the book consists of intonation and training. In a few scattered scenes we meet the main characters of the novel. Briggs defends himself from small armed group of friends in a house and he shows the extraordinary courage and obstinacy. Mary Bee invites a local priest and discuss the problems of crazy women. And in an example of one of the four insane Swarthout paints a hard life of migrants. Disparate chapters later will weave in one knot, and so many different characters will turn out almost in the same cart.

On dissimilarity and incompatibility of Mary Bee and Briggs a large part of the novel is built. It is hard to find two more different people, but they need a few weeks to stay side by side with each other for a common goal. Not by words but by deeds - so both characters are revealed. Between them hardly a conversation occurs, but Briggs with each new chapter mans up, and Mary Bee on the contrary - all her masculine zeal is gradually eroding.

Dissimilarity of the two main characters also often causes laughter. For example, when Briggs gives one horse to the Indians, Mary Bee asks what the Indians will do with the horse (assuming that they will breed horses or use it at the farm), Briggs, noting excellent health and thick sides of the horse, says that the Indians simply will eat the horse.

Swarthout achieves a high degree of immersion in the world of the Wild West because of authenticity of details. From the novel you can learn dozens of curious and useful things, it is a pleasure to observe how, for example, Briggs treats mule, eliminates one of the female patients with fever or repairs wagon wheel.

Killing his protagonist in a quarter until the end Swarthout takes a risky step. All novel is written in the third person, but most of the action described from the point of view of Mary Bee, not Briggs’. The more surprising is such change of narrative perspective closer to the finale. But the world of The Homesman is that: people do not change, and Briggs has not brightened during several weeks of travel. He remains as he was.

The reader will definitely enjoy this trip on the Wild West.