All the Beggars Riding 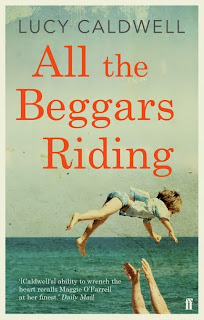 Lucy Caldwell
All the Beggars Riding

The novel is set in two time layers. In our days, the protagonist of the novel Lara recalls the events of her childhood in the early 1970s. Lara is now trying to write a memoir about her family while attending creative writing courses.

Lara's mother Jane died of a heart disease, and Lara feels like an orphan. To write her family story Lara felt after watching documentary about Chernobyl. In this film, the book protagonist (and narratoe) first saw the effect of a death of a loved one on his survived family members.

Lara's and her brother Alfie’ father Robert died in a helicopter crash in 1985. And it was the father's death, and not the mother’s, that quite devastated little Lara.

Lara begins her memoirs since that year, 1985, when she and her mother and brother went on holiday to Spain, where they had had to wait for their father, a military surgeon, working in Northern Ireland, where at that time the attacks occurred frequently, and therefore the best doctors were invited to work there, where it was often necessary to save the lives of the victims of explosions and injuries from firearms.

This charming story about lies and human weakness begins surprisingly too slow. The author's voice - Lara – seeks too long to right approach to tell her story, and the impatient reader can shut the book, exhausted after the first 30 pages. And he will be wrong, if he does not continue reading.

Lara, of course, is disingenuous when she says that she is not a writer, that she does not know the craft, that her story is awkwardly built and it does not explain a lot. In fact, the narrator, and thus Lucy Caldwell herself, writes professionally, showing events of the novel from different angles and from different layers of time. Lara the child could not know everything, and accordingly, in the book, some questions remain unanswered, that makes it more intriguing. Through child's eyes we see only the visible part of the family story that a child could see and understand. Questions tormenting later Lara the woman torment us too. What Robert and Jane felt, enveloped himself in a web of deception in the first part, we can only guess. The second part opens the curtain from one side. Lara the daughter constructs the story from the point of view of her mother. Lara worked out something herself, her mother told her another part before her death, but the story of Jane turned shrill and believable.

Caldwell did not lay out all the cards on the table, leaving us without a chapter from the POV of Lara's father. In the third part Lara and her brother, children of the deceased surgeon, only build their guesses about who actually their father was, what he felt. So we can either blame Robert or support him. Those chapters that are written from the present at first seem superfluous, but closer to the end we will realize their value. These chapters in detail paint how the children of a man who led a double life turned out.

All the Beggars Riding is also a story about the hard work of a writer. Story is story, it can be exciting, and it can not be, it can be for the mind, and it can be for the heart, but a story still needs to be transferred to paper. And just seeing the writing, you can appreciate the story. The narrator Lara overcame herrself to understand that the writer's voice can be found not at once, but gradually.

Caldwell writes with heart and wit, her book is an undoubted success.