My theory is that we either ought to give the niggers their rights—not just lip service, but every blasted right there is from voting to fornicating, that we ought to make them have all these rights and enforce their right to them by law, and I mean tough, FBI-attracting law, until every man jack of them is just as equal as you middle-class, white, Anglo-Saxon Protestants. I said either and I mean it. Either we give them the right to marry your daughter, if you got one, and fix it so that they’ll not only have the same social and educational rights that you have, but the same economic rights—the same ways and means that you’ve got to the pursuit of happiness out there in one of those fine suburban developments instead of in a slum. And then they’ll be just like you white folks with all your sound moral values, your Christian virtue, and your treasured togetherness. ’Course, they might lose something along the way, something like a culture, but that ain’t nothing. Now I say either we do that for them—make ’em just like everybody else—or, by God, we ought to drive ’em down in the ground like tent pegs!

- from The Seersucker Whipsaw by Ross Thomas

Somebody Owes Me Money 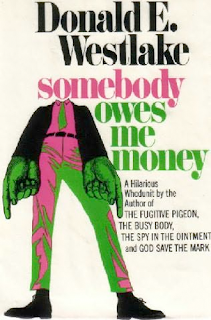 Donald Westlake
Somebody Owes Me Money

NYC hack Chet Conway gets a tip from a shady underworld character to bet on a pony that should bring good money to Chet. Young cabbie, who happens to be an obsessive gambler, places a bet, the horse wins, Chet, happy as a horse (if horses could experience happiness) and almost $1000 richer, goes to his bookie’s apartment to get his winnings. The bookie is killed, the widow is screaming murder, and Chet suddenly is not sure who does he get paid from. And all bets are off.

In the beginning of the novel there has been a snow collapse in NYC. We survived a pretty intense snow collapse in last year’s October. It was two meters of snow in two days. And though NYC of the 60s is not small town Russia of 2010s, let me tell you that all that running around and racing through the streets as it happens in the novel is close to impossible. Not less impossible is also running around in summer clothes only. Why would Westlake need to create this collapse for his book? Argh, so much for realism in fiction.

Though it is considered as a comic caper, Westlake used a couple of new approaches more suitable for his serious enterprises. His Mafia-type characters started to have Italian names (and that is before Slayground; Westlake was there before Stark), their speech became closer to life. I think in this book mobsters for the first time for Westlake spoke with Brooklyn accent.

Once again the theme of corruption in the police reoccurred here, as it constantly were in Westlake’s previous books. This time it’s not some patrolman, but a homicide dick. One would begin to doubt if police in the US ever held a non-crooked cop. Still, I was skeptical, while reading, that a homicide cop would be bought (yes, history has seen some examples), and this cop would be bought by this particular family. Homicide detectives work in pairs, and it’s doubtful that Golderman could be useful to Mafia in this case.

I myself have similar attitude to police. Every cop personally whom I knew and know, are honest and hard-working man. I enjoyed working with cops, while I worked in paper, I enjoyed learning from them how their work is done. My school history teacher after some years in school quit, and had gone on to be in investigator, analogues to D.A. investigator in the US. While he was a teacher, he had been very friendly with me, we were always joking with each other, always messing and kidding around. I even supplied him with VHS cassettes, me, 13-year-old kid. Then he became sort of a cop, and died very early from a heart attack. Was he a bad man? Absolutely no.

Yet the whole police system, as always any system, is rotten to the core. Good people, evil system. And I don’t have any single reason to like this system.

That being said, I found it difficult to believe that Chet would go to Golderman for help, being on the run from the mob. Mob first rule is never talk to police. Chet, going to police, signed his death warrant (only that the cop was bought, and no one cared). Slippery plot move.

Another thing that made me wonder is Chet’s age. He’s 29, roughly my age, he’s a cabbie in NYC, and probably I am applying modern realities on New York of the 60s, but how many young men today in NYC work as hacks? Westlake clearly stated Chet’s age, yet for me the protagonist does seem older, maybe early 40s. His habits, his world view, his character features, they all scream at you: older!!! The protagonist’s occupations was also a useful plot feature.

I found this novel not in the least funny. I liked it fine, mostly because of the usual set-up of Westlake’s gangster stories, where the protagonist first talks to all other parties involved, and then gathers them in one room to reveal whodunit.

There were a couple of moments that made me smile (particularly the scene in Goldman’s house), but that is all. In fact, I laughed more reading Westlake’s serious works.

I liked Somebody Owes Me Money fine, but I’ve read better Westlake.