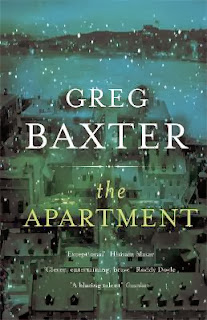 The unnamed narrator, a 40-something years old American, comes to unnamed European city. The narrator was born and lived in a hot city in the desert and now wants to live in a cold city. All events of the book take place in a single day in December before Christmas. European city is not named and it is a combination of several European capitals. There are a zoo, street cars and buses, there is a subway and markets selling hot wine and sausages, on the streets people are playing musical instruments.

The narrator lives in a hotel, where he remains in a state of anonymity. He had already spent several weeks in the city, walking aimlessly through the streets, visiting museums and galleries, buying newspapers, which he still can not read.

The narrator is doing nothing, but he does not need to worry about money. He is a veteran of the Iraq war in Iraq and made there a fortune. He served two terms, first as a Marine on a submarine, and then he returned as a reservist and worked in intelligence. Knowing the war in all its ways, the narrator sets up a business in Iraq, providing the Iraqi police with computer networks and a tracking devices.

«I was making so much money that it didn’t matter. I worked with various private military companies, engineering firms, the Iraqi police, and the US government. I made a thousand dollars an hour for a period of about four weeks, taking vast amounts of information across multiple systems and organizing them onto a database I built for the Army. The way I estimated my fees for the Army—I worked for the Army more than anybody else—was to dream up a figure that seemed unreal and add a zero. The Army didn’t trust you if your fees weren’t preposterous. I didn’t spend anything. When I wasn’t working, I sat in my room and smoked cigarettes, and I listened to the city.»

Now he is rich and can afford anything. He buys the most expensive winter boots, which turned out to be military boots, but this is not immediately noticeable.

The narrator meets a 25 -year-old girl named Saskia at a museum. She works as an economist, loves to party and is the only friend of the narrator. Between them there is no hint of a romantic relationship. They just know each other and live the moment without planning their future life.

Together with Saskia they will go to restaurants and shops, meet Saskia’s friends and actually search for apartment.

A blurb to the story could well be condensed to that one sentence. The novel features transparency and outward simplicity of the plot, although simplicity is deceptive, as in this case. Baxter slides on the "now", allowing himself to describe the most unnecessary things and actions. The narrator can describe a long walk to the bus stop, airing rooms, brewing tea, thus we better learn the inner world of the protagonist, his unwillingness to plan his life longer than a day.

With almost emotionless voice the unnamed narrator describes what he sees, but digresses, thinking on art or history. The veteran of this novel is not a simpleton, a gruff and fighter, he does not fit into this stereotype. He's smart, sensitive, observant. He cleverly hides his invisible scars, received in Iraq. The protagonist can suddenly interrupt the narrative and recall torture and violence he’s seen in Iraq. He is kind of conscience of America, he’s in fever on his own land. In Europe, he becomes invisible, a ghost that no one knows and who does not want to know anyone. Rapprochement with people bring memories of the war.

Baxter in one flashback scene leads the narrator to the lawn of a neighbor in the United States. Neighbor is also a former military man, who made money during the war. On the advice of a neighbor, our protagonist acts. The government is ready to invest any money into the war, and the contractor can ask a big price, the bigger the better. The narrator makes the state pay him for his services the big price. In this scene, it’s clearly revealed the absurdity and the pragmatism of any military action.

Baxter’s prose obviously is not everyone. He writes paragraphs on dozens of pages, avoids dialogues, can jump from one subject to another unexpectedly. Baxter purposely avoids invented story within the novel. Search for an apartment – isn’t it an everyday story? The Apartment is essentially plotless novel, but I can not say that nothing happens.