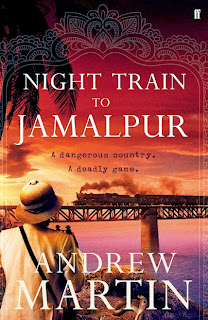 At the beginning of the novel Stringer takes the Night Mail train from Calcutta to Jamalpur in first class carriage with five companions, among them Major Fisher, who was set as a partner to Stringer to investigate corruption cases. Stringer does not trust Fisher, considering his dark personality, he is able to do anything behind Stringer’s back. Fisher behaves surly and despises all Indians.
In the car, our narrator meets with Jim Young, an Anglo-Indian, who is also working on the railway. At night during one of the stops someone kills Young, escaping in the desert. Everyone in the car have heard the shots, but no one has caught the killers. The lock on the door of Stringer’s compartment was broken and Stringer concludes that perhaps someone wanted to kill him, not Young. Someone calls the police, and Detective Inspector Khudayar Khan of the C.I.D. is assigned to the case.

Stringer takes an interest into this matter investigating available suspectes in his spare time. The third case, which Stringer also takes unofficially, becomes "snake killings" in the first class carriages on the Railway. Someone throws poisonous snakes, including king cobras, in first-class compartments. Snakes have killed more than four people and continue to kill. People become afraid to go first class, although trains are carefully checked. Stringer wonder who can do this, because only the master can control the snake and put it in the car without hurting himself.

In the main corruption case Stringer has two primary suspects, William Askwith, top brass in the traffic department, and Douglas Poole, his deputy. Both are Englishman, as other brass on the Railway.

Perhaps those who read the previous books in the series will have even more fun, but even as a stand-alone book Night Train to Jamalpur is quite a smart mystery. Martin throws the bait immediately, starting the book with murder, and then slowly spins all three (even four, if we take into account the matter with Stringer’s daughter) plotlines. The novel continues without haste, that in general it is quite clear. The detective has the three investigations at the time, one officially and two semi-officially, and he can not solve them all immediately. However, it turns out that the main plotline, corruption case, remains in the shadows.

The novel is written in the first person, the narrator Stringer generously shares with the reader the obtained information, and the detective and the reader are on an equal footing, having the same evidence and conjecture. Martin fills the book with suspects in all three investigations. Especially tickles the nerves that someone wants to set Stringer up for murder. All three cases are resolved quite logical and using deduction, although you have to admit that in the books of this kind everything is possible.

In addition to the suspense of plot, Martin delivers on the atmospheric front. Indian background is colorful and bright, details are believable, excursion in history is such that you feel the era, but do not feel that as if you read glossy booklet about India. Martin knows rails and sleepers, as his own ten fingers.

What's confusing is the main work activity of Stringer. He spends little time on his main job, driving around idly to and fro. You can see corruption behind this.

It is a good genre novel.