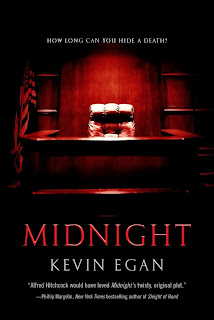 At The New York County Courthouse Judge Canter dies in his chambers early in the morning on New Year's Eve. His death from natural causes would have passed as something ordinary, if not the date of of the death. Under the rules of the New York courts if the judge dies, his staff has the right keep the jobs until the end of the calendar year. Death of this judge for his secretary, Carol, and clerk Tom means that the next day they will be out of work. And finding a new job with current economy will be difficult («Hard enough as it was to stay with the court system today, it was harder to find a decent job in the private sector. And for someone who had been in the court system as long as he had been, leaving was near impossible, even in a good economy »), and both heroes also have serious financial problems. Carol alone raises her disabled son and helps her sick mother, and Tom because of gambling got into a debt, borrowed money from a loan shark and must now return part of the debt every month. Loan shark muscle regularly reminds Tom what will happen if he stops paying.

Tom comes up with the idea how to hide the death of the judge at least for a day. If it succeeds, he and Carol, which he begins to feel affection to, will keep their jobs for at least another year. Judge and the last ruling in his life, in addition to the staff, will be of interest to a trade union leader. The situation gets complicated and rapidly is out of control.

We have become so demanding to reliability of books we read that began to forget: literature is fiction, fantasy. If you remove an element of allowable from it, make it too close to ground , it will take all the pleasure ouf of literature. Constrained writer has nowhere to turn, his plots are believable, but predictable. That's what refreshing in Kevin Egan and his novel Midnight - it has space for plot maneuver. The plot can be called impossible, but it is incredible not so much, if the book is not transferred to shelf with fantasy and science fiction. Egan seems to inherit the writers of the thirties and forties, who did not hesitate to look for loopholes for catchy, even the wild plots. The author found an interesting loophole and generously took advantage of
it. Plotwise Midnight is a vigorous mixture of judicial thriller and neo-noir. Tom and Carol are typical noirish characters, cornered desperate people who think that there is no escape. Rather, there is an escape, but not one that can be called legitimate. Characters actually do not cross the law as it is. The problem is that where there are amateurs, there are professionals. And criminals professionals usually are more experienced than amateurs.

The couple of heroes first takes his fate into their own hands, but as we progress through the novel, we see how their fate falls out of their hands. Invaders become hostages, and it is impossible not to empathize with the main protagonists.

Midnight is a tense read, an excellent example of modern noir.