Cartoonist Seth at the beginning of the book reveals itself: the book was written for fun, “the drawing is poor, the lettering shoddy, the page compositions and storytelling perfunctory”, and indeed the novel as a novel was not intended, and was only as set of sketchbooks. The author is cunning. In fact, the poor drawing and the shoddy lettering guess stylized 40-50s comics, and the abruptness plot resembles a good documentary movie - about the fact that madness is always possible, but to catch the madness and understand it is not so simple.

Wimbledon Green, as it is written on the cover, is the greatest comic book collector in the world. Reader will trace the way during which Green had become a collector, and at first watching for those Green years being funny young fat Green, then a daily routine of his life already in the status of the great collector. It's a mystery according to the laws of half a century ago pulp comics, in which one key element is disclosed on the first page: Green disappeared somewhere along with his huge collection, and no one knows what happened to him. Despite the seemingly partial loss of detective intrigue, you do follow the adventures of Fat Green, while still can enjoy reading.

Throughout the book, Green will be chasing the rare comic books, accompanied by his assistants, women in sunglasses and an enigmatic Hindu, and parallel to this not the last people in comics fandom will tell you what they have heard about the great collector, under any circumstances have met with him, and suppose he still lost. Such sketch inserts (one person - one page) perfectly play the role of fragments from the documentary, which could shoot about the disappearance of Green.
Special mention deserves one of the rare comic included in the collection of Wimbledon. "Fine and Dandy" is the story of two funny hoboes, thick and thin, whose sole mission in the life was to be free. And to be free for them means to be homeless. If you read the whole book with a smile on his face, then this sketch really make you laughing out loud.

It is not necessary, however, to think that the whole book is a story about the chase, written for fun and laughter (and laughter and fun are really there). "Wimbledon Green" is also about that everything changes (and need to change), everything goes, but something subtle is always with you. This subtle thing, perhaps, makes any person a little crazy. It is important to switch to the coin at the right time.
Автор: Ray Garraty на 11:48 PM No comments:


British magazine Black Static continues to print high quality stories, adding to the fiction section a solid non-fiction one. Book reviews by Peter Tennant have breadth and versatility, and the Tony Lee section about latest movie releases on DVD and Blu-ray wins over both the quality and quantity. A little frustrating thing is that a sufficient number of low-budget films mentioned in the review is only available for British film fans.

The main part of the magazine is fiction. 5 stories of different levels authors, from the already those who have a few published books, and those who have never before been published. The beginning of this issue is James Cooper with the brutal novelette «Eight Small Men» from his forthcoming book. The two brothers who had grown up (one of them is the narrator) are going after so many years to visit the house of his stepfather to remember that they have experienced many years ago. This "memory of the past" method does not add anything to the story but helps to set pauses in the right places in the strained narrative. Cooper is able to catch up with horror, accurate in psychology, he has a good style. Brutal-viscous prose is the meat, which makes the story tasty and juicy. However, the «Eight Small Men» is more naturalistic mainstream story than horror. The ending, only in which horror element does occur, is somewhat far-fetched, and eight small men - it is still deus ex machine. However, such turn does not disappoint. Everything defines the atmosphere and the tone. (Review of the coming out soon in Atomic Fez book by James Cooper «The Beautiful Red», which includes the «Eight Small Men», will be soon.)

«Maximum Darkness» by the newcomer Alan Scott Laney is not a bad sketch about the power of books over people and obsession. The author has the ability to construct the plot, write proper atmosphere, but the heroes of the story, the brother and the sister, are stilted to details, and the writer fails to draw on the story on the heroes, already not too original. This is a weak story by the author which later seems to be able to write better.

«Babylon's Burning» by Daniel Kaysen is a great example of humor and horror in one bottle (just horror and humor, not humorous horror). The elder brother who works in an office with doubtful activities related to witchcraft calls young one to the party. He was stubborn at first, but then, after learning about the opportunity to have sex with girls working in the company, agrees. With one of them, Evelyn, they look circus show with cutting off hands, but it is more terrible: hand cut off for real.
Kaysen mixes black humor, ancient curses, the elements of noir in the proportions that make the story is a good entertainment.

The ending of the issue is «Death By Water» by Sarah Singleton. Succeeding in creating an atmosphere of despair, the author seems to have forgotten to diversify the plot, making it a mere formality. Ian, who lost a year ago his wife, is looking for a medium that could give him a chance to have last talk with his wife. Ian should pass three mediums, each of them carefully and lovingly written out, eclipsing the narrator. However, except for throwing and suffering of the hero, we do not see more in the story. Ian would still be able to talk to his wife, but in the title there is the word “water” for a purpose - at the end of the story too much of it, so that the effect of neatly written out the characters and a dark embankment unfortunately washed away.

We should watch for further works by James Cooper and Daniel Kaysen.
Автор: Ray Garraty на 7:05 PM No comments: 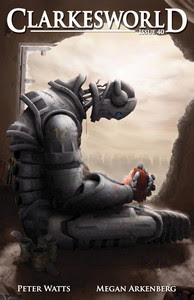 Non-fiction part of the issue doesn`t let say much: the article about video games is not my cup of tea (I have not been playing games since 16), and interview with Lucious Shepard looks like 40 other interviews with Lucious Shepard. In every interview he invariably tells how he`d started to write, how attended the Clarion Writing Workshop, how lived here and there, how he got idea to write one or another of his books. Indeed, Shepard have an inexplicable appeal, that`s why we read the interview parts of it seem to have been read somewhere.

Fiction part of the issue is more interesting. Every month Clarkesworld offers 2 fiction pieces by high rate writers referring to their rate not just due to old merits but confirming them by their new works. By the way high rates don`t mean all writers publish in the magazine are hardened veterans who drank with Heinlein and played golf with Tolkien. Clarkesworld publish as well new writers.
40th issue (first in 2010) offers short stories by Megan Arkenberg «All The King`s Monsters» and by Peter Watts «The Thing». Watts is not a newcomer indeed, and Arkenberg published a few stories in webzines.

Johnathan Strahan praised Watts` story and regretted that “The Thing” wasn`t included into the final version of his Eclipse Three anthology due to unresolved copyright issues. “The Thing” is good story but not as much as Strahan wrote. Narrative is told from the point of view of that monster from John Carpenter's 1982 film “The Thing”. Narrator in the story is the Darkness itself per se. Well-written, story holds on a reader in tension till the end making us watch for the perishing forwarders with wide opened eyes. But the problem with this Watts` story is the same as in dozens of likely stories where a writer tries to show thinking of mind alien to human beings such as ET or monsters from Carpenter`s film which origin is alien too: how don`t you try to show an alien mind this alien whatever will think like a man. As far as a writer itself is a man so characters of his works are the men as well though if they hide under the skin of such alien creature bearing inhuman, unearth mind. And Watts unfortunately wasn`t able to achieve that. The writer had set very high goal but failed and it doesn`t detract from his story`s merits.

Arkenberg`s story lays in a completely different plane though it affects as we can show from the title of the story to the monster subject too. Lyrical tale about the girl caught in confinement and lost her groom is at the same time retelling folk tale about Humpty Dumpty and aching story about that every man has his own monster and no escape from it. Arkenberg has good style, skills to carry out plot, but she lacks the tension and originality.

Two tales about monsters each one of them lacks something.
Автор: Ray Garraty на 8:23 PM No comments:

So let`s start.
I am 20-something Russian. English is not my native language and I beforehand apologize to you for probable mistakes in my writing. I`ll do my best for not letting them go.
My day job is a journalist for local newspaper. And books is my hobby. I don`t divide books into genres and think there are only two genres – good or bad fiction. So in my reviews there will be all sort of books.
I plan post as well comics and graphic novels reviews two times a week.
I don`t give books any stars or marks: books are not pupils in the school.
I don`t like long posts and I don`t think I will write them. Blog post is not a dissertation.
I don`t think it will be fun but I think it`ll be useful.
Автор: Ray Garraty на 8:02 PM No comments: