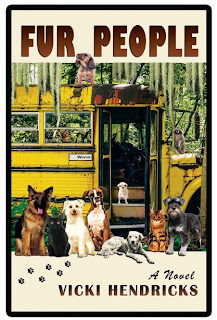 Sunny Lytle returns to the small town of DeLeon Springs, Florida, where she had once grown up. Sunny is broke, but she has a whole company of furry friends, from dogs to rabbits. Renting an apartment is not an option with so many animals, so Sunny settles in a converted school bus in a secluded spot in the park. Sunny knows all the places in the area and she chooses such a place for her camp so tourists and casual locals wouldn’t disturb her. Keeping animals inside the bus is prohibited, so Sunny should also hide from animal control service.

The novel protagonist for long can not find a job, almost starving, primarily caring for her furry family, but quickly acquires acquaintances. In animal shelter Rita, a veterinarian who has lost the license, sympathizes to the girl and her pets and in the supermarket local half bum, half-loonie Buck, fearing attacks of aliens – magnetoids, seeks Sunny’s friendship. Sunny will have to fight for her furry family.

Animals in literature have always been somewhere in the margin. People have always been on the first place, and if our smaller brothers became the protagonists of books, then mostly it was children books. Recently, the new trend started when dogs and cats in the mystery fiction began to restrict eccentric detectives and tough guys, but it was strictly genre fiction, not for a general audience.

Vicki Hendricks in her new novel gives animals the right to be on par with humans. The novel is written from the point of view of many characters, among them a dog. But the characters and the author herself avoid the word "animals", preferring fur people. In her stories Hendricks previously used animals (alligators, apes), but it was just plot elements, without a specific content. In Fur People dogs, cats, rabbits and ferrets make the plot already work for them.

Fur People has already been called animal lover noir, partly it’s accurate, there is an abundance of fallen and far from perfect people. But this novel at the same time is perhaps the calmest work from Hendricks (I’m judging other novels by synopsys, being familiar only with numerous short stories). Perhaps even the most humane, and this is despite the fact that the novel is not only about humans, but also about animals. And certainly Fur People is the most nonstandard author’s book. The novel is so distinctive that simply did not find a publisher.

Touching is the best definition for this book: fur people or animals, but the humans are responsible for them.

«"It's not fair to them-that's what you're saying, like people always say. You don't understand. They're family. You don't give up family when money gets short."»