My Age of Anxiety 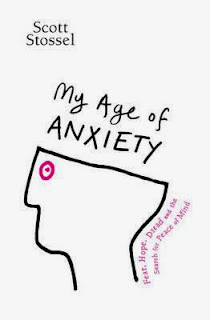 Scott Stossel
My Age of Anxiety

Scott Stossel, author of this book, since childhood suffered from anxiety disorder. He was afraid to be alone, worrying that something happens to his parents. Over the years, Stossel lived with his disorders and phobias, whose number exceeded 20. The book opens with a scene of Stossel’s wedding, when he almost loses consciousness because of anxiety attacks and with great difficulty completes the whole wedding ceremony.

The author immediately warns us that he is not a doctor, not a specialist in mental disorders, not a psychologist. This book is not a medical investigation, it is half memoir, half journalistic investigation. Stossel is a journalist and editor, who took leave during the writing of the book. And we can say that it is a miracle it was finished, so many times the author suffered from panic attacks. He was afraid to miss a deadline, afraid that because of the leave he can be fired from his job, and during the writing ofthis book his family have been through many unpleasant moments. Nevertheless, My Age of Anxiety was completed, published, and it turned out quite successful.

The book turned out brave, though Stossel does not consider himself brave. He goes through his phobias, his dependence on drugs, his family tree. Anxiety disorder and other phobias run and determined life of the author. He was forced to adapt to his anxiety, has to carry a pack of pills, and in case of some important events to pump himself with medicines, often also drinking alcohol, to somehow control his fear.

Stossel elaborates on the development of drugs against psychological disorders, their implementation, and a change in general studies of their effects. Medicine against panic and anxiety existed early in the last century, but were used for general purpose. Gradually, with the determination of specific disorders in groups, with a clear differentiation, pills become more narrow-effected. The consumer environment also changed. At the beginning of the last century antidepressants were used only by rich people, actors, workers of stressful occupations. But later the pills become more affordable, and people everywhere grow an addiction of antidepressants. One antidepressant was replaced by another, then they were many and different, depending on the disorder.

Stossel, almost all his life taking pills, writes that pills help him personally. Yes, they are addictive, most likely cause damage to the brain, to cause side effects, but they smooth panic attacks. Antidepressants do not cure the disorder, but they allow to control it.

Stossel writes accessibly about not easiest material. He supports his own experience with research, and, starting from his own experiences, finds approach to the problem as a whole. The author doesn’t overcomplicate: not goes into the dense wilderness, full of terms and statistics. We throughout the book do not forget that this is not just an attempt to make sense of fear and anxiety in our time, but also a memoir.

The theme is covered on all sides, from the terminology to treatment. Author’s origin narrows the problem mainly to the United States, but this should not prevent plunging in this interesting book, doesn’t matter where you live.