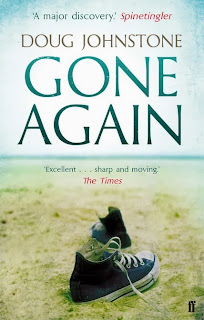 Photographer of an Edinburgh newspaper Mark Douglas photographs whales on the beach in the coastal waters, when he gets a call from a teacher from his son Nathan’s school who says that Mark's wife, Lauren, hasn't turned up to collect their son. Mark takes his son home and tries ring his wife on her mobile phone. Her number is not available.

Mark has no idea where his wife could go, she had no friends, work is long over, the phone number is unavailable. Lauren also is pregnant. Mark rings to his friends, but no one has any idea where Lauren can be. Mark turns on his wife's laptop, checks her accounts in social networks, desktop - nothing.

Mark worries that Lauren may have a relapse. Six years ago, when Lauren after a difficult birth barely survived, she had disappeared for ten days. Mark was confused and did not know what to do. He was left alone to nurse the baby, wondering when his wife would return. Ten days later, she’d returned, but did not say where she was all this time, and Mark did not ask, fearing that it could adversely affect the wife.

After brilliant Smokeheads and disastrous Hit & Run we could expect anything from Doug Johnstone. Gone Again has turned out much better than Hit & Run, although not as good as Smokeheads.

Johnstone’s head is clogged with interesting ideas, but he did not always successfully implement them, not revealing his potential by 100 percent. Here, the first half of the book is brilliant. The author from the outset throws a hook, and it is impossible not to get caught at it. The book grabes you from the first pages, and gradually Johnstone begins to return to the past, giving the background on the characters, the history of the relationship between husband and wife, and that includes the secrets of the past. The book is written in the third person, and we can clearly hear Mark’s voice. He's a little short-tempered, but a caring family man, a loving husband, he seems to be a positive character, but by the middle of the novel Johnstone makes us to think otherwise. In the middle noir intonations start to sink through: there is a possibility that Mark is an unreliable narrator, and his mistakes play against him. And now Mark from the victim turns into a controversial character, even shady. Johnstone little by little raises tension.

In the second half the book loses its suspense, and the novel is slipping into a more or less linear thriller. There are coincidences like that Mark holds a gun at home (for what in Scotland you can get a real five-year prison term), and even when Lauren was depressed, he did not get rid of a gun. The transformation of Mark from a broken hearted photographer with emotional problems into an action hero, shooting with a gun at the villains and torturing people, look too unnatural. Yes, you can believe that Mark is short-tempered and sometimes loses control of himself, but I do not believe that he would use a few tricks from the arsenal of the professional thief Parker from Richard Stark’s novels. It is one thing to break a woman's nose, and another to breaking into homes, waving a gun, shooting people’s hands.

However, it's a quick read that can entertain and deliver a certain amount of pleasure. I just wish that the author worked on the characters better.