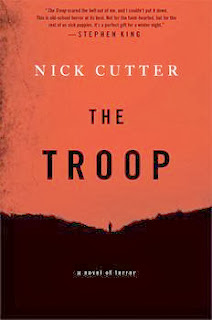 A group of teenage boy scouts led by their mentor come to an abandoned island located off the coast of Canada for the weekend to do what Scouts usually do: set fires, navigate the terrain, telling each other stories and generally comprehend the lessons of survival in the wilderness. Scouts do not take with them any mobile devices, but because of the threat of the storm ahead Scoutmaster takes one radio, in case they’ll need to contact with the mainland. Two days later, a a boat is to take the troop from the island to the mainland. The troop has no boat, they are completely cut off from the mainland.

The troop is led by Tim Riggs, a former military doctor who knows his scouts almost from the cradle. Teens respect Tim, although it is obvious that their Scoutmaster is not macho, he’s quite an ordinary man, and even his leadership abilities are overrated. Riggs and five teenagers, Kent, Shelly, Newton, Ephraim, Max, stay in the house, where previously were imported products and other necessary items.

First night on the island scouts already have gone to bed in a cabin when Riggs notices how a boat closes to the island. A man gets out of the boat, goes to the house and asks Tim for food. In the dark Riggs looks at the stranger and notices that he is incredibly thin. Not daring to refuse a stranger, Tim gives him food and allowes to sleep in the house, after closing the door of the room where the scouts sleep. The stranger wakes everyone at night, smashing the radio to the floor. Tim calms the stranger down and examines him better. The man is a bag of bones, so thin people just can’t be. Under the skin of the stranger Tim notices movement, as if someone creeps under.

Sometimes it all comes down to a cliche. There is a book, built entirely on a pattern. We accept this pattern as something self-evident. And then everything depends on the writer: how well he will be able to decorate a cliché, how he can genetically modify a pattern.

The Troop is a fairly typical horror, almost adjacent to the subgenre "zombie horror." There is a virus that causes a person to eat everything in his path and the carrier of the virus itself almost becomes a skeleton, so he loses muscle tissue on the body. Infection can be passed, and, as in the case of zombies, getting quite a small amount of tissue from an infected person is enough to get sick infected. Nick Cutter varies a tired zombie scheme so that the action of the novel takes place not on the large territory as it usually happens, but on a strictly confined space. Cut off from the world, five Scouts will have to fight for their life not with a zombie invasion, but between themselves.

Impermeability gives the author to forget tricks of fighting with flesh-eaters and focus on psychology. Cutter gradually reveals the nature of each scout, throwing into the novel a fair amount of flashbacks. And not without a cliché: a boy who has an anger management problem, the second scout is such fat geek, dreaming of a normal life, the third is a sadistic psychopath. The idea of a sociopath in the world full of zombies is also not new, though not so common. But the character of Shelley helps to better reveal the nature of cruelty, enthusiasm to violence among children.

The book doesn’t offer plot twists on every page, but you can not say that everything is predictable. Suspence keeps up to the finale, and it may seem obvious, what happens in the finale, the important here is not the "what" but "how" and "why."

Gradual unfolding mystery of the escape of the experimental patient and secret experiment using documentary pieces can be called successful. Cutter does not lay the blame on anyone for what happened. Fragments of transcripts from the tribunal, record experiments, magazine articles give the book the effect "based on real events."

The Troop does not open new lands, but it is above average in the category of horror. And yes: it’s a novel for adults rather than for teenagers, because of the abundance of foul language and some scenes with blood and guts.