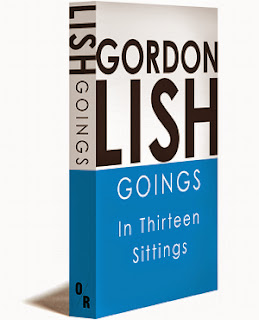 This is the first collection of original stories by Gordon Lish in 16 years. Master of the avant-garde prose, a brilliant editor, Lish remains true to himself in a new book. The collection (quite thin, a little over 130 pages) is titled Goings: In Thirteen Sittings with a meaning. It will be hard to read it in one sitting, despite the small volume. Lish’s prose requires attention, diligence, perseverance. With each cracking of book you make an attempt, one sitting is limited to one (and sometimes even part of) story.

Stories in the book are deliberately autobiographical. For every "I" here we have an explanation in brackets (Gordon) or (Gordo). So it’s reducing the distance between the protagonist and the author.

Even autobiographical element of the stories is nominal. Detail of the past or the present becomes the catalyst to the almost missing plot, and the plot is reduced to verbal gymnastics. Reductio ad absurdum style makes the reader giddy, often causing transient amnesia: it’s hard to remember where a story began.

Avant-garde of the prose always questiones its readability, and Lish here is saved by his sense of humor. In his stylistic flourishes Lish the writer regularly makes fun of himself, Lish the old man.

I did as she said, and before I could defend myself, she knocked my elbow out of the way and hooked her finger - from outside the shirt, from outside - through into the armpit.

"What?" I said, wondering but not all that assiduously, how she had managed to get her finger into my armpit from the outside.

From ouside the sirt, I mean.

Well, it turned out I was.

Thus through the stylistic jungle breaks something totally, humanly simple.

Hopefully, with the next collection Gordon Lish will not wait another 16 years.