No One Rides For Free 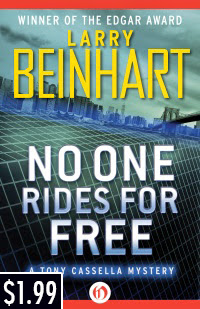 Larry Beinhart
No One Rides For Free

A lawyer of a large American corporation Edgar Wood steals from his own company several million dollars, gets real prison term and to prevent his incarceration, he is an old man who are used to a life of luxury, requests immunity in exchange for testimony. Wood promises federal commision a detailed account of all dirty business of the firm and its management, and the SEC will put Wood on the witness protection program at the time of interrogation.

Wood’s snitching violates attorney-client confidentiality, and the corporation management is worried that one of them can go to prison after the Wood. Then one of the corporation’s lawyers hires a private detective Tony Cassella to find Wood and find out (preferably without breaking the law) what Wood says to the feds. Cassella quickly finds a house in the countryside, where the feds hold Wood and where Wood meets a federal investigator for questioning, but the detective fails to learn anything from Wood. Wood is gunned down outside the restaurant, presumably during a robbery. Wood’s daughter does not believe that her father's death was an accident, and again employs Cassella, that he would dig into the murder. The P.I. immediately feels that the murder was not accidental.

«No One Rides For Free» is very original fiction, offering not the most common background for a detective story. The novel is set in the world of large corporations, federal agencies and edge investigations. Edge in the sense that almost all novel the detective works on the borderline between legal and illegal methods. He's a detective with the license, but he could be someone from Ocean's 11.

Cassella is on the verge not only professionally, but also regarding everything else. He cheats on his wife and uses cocaine in large doses regularly. However, Cassella is not completely fallen character: he refuses to see his “connected” uncle and doesn’t give up in the middle, no matter how dangerous the situation is getting. He even does not condemn Edgar Wood for the fact that he turned against his friends and colleagues:

«But it could get closer to the line. I hated prisons. I understood Edgar Wood's panic. I understood every punk in the world who sold out his friends to stay on the outside. Something ached in me to play touch and go with the line that had bars on the far side. It was the same yearning ache that lurched inside me when Willie Contact offered me the cool white cocaine. It was in my testicles and lower bowels. There was a sensation, as if the devil stood behind me. When I turned to look, there was nothing there, not even my own shadow.»

One of the charms of the book is to see Cassella in action. His methods of investigation are not ordinary and quite authentic.

No One Rides For Free could be called a mixture of Andrew Vachss (well detailed criminal underworld) and Michael Collins (who is Dennis Lynds; stylistic abilities), if not for the fact that this novel was published a year later than Vachss’ debut Flood, so Vachss could not influence Beinhart.

The novel has so much audacity and anger, while Beinhart has so much talent, that the following fact seems incredible. No One Rides For Free is never mentioned in the lists of the best P.I. novels of all time. And this is enormous injustice. An absolute must-read.