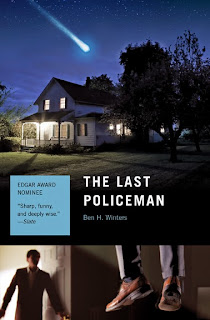 Asteroid 2011GV1 is coming to Earth, collision is inevitable, the only thing that is not known – the area on the planet the deadly asteroid will hit. Awareness of death radically changes people's behavior. Someone immediately makes suicide, someone quits his or her job and starts working on a "Bucket List " - makes all the dreams and ideas reality, as soon as still there is time. Government stops most of its duties. Internet and mobile communications almost disappear, the use of fuel becomes a felony.

Changes affect state police as well. In the small town of Concord police departments are downsizing, and the number of detectives is minimized. Nobody sees any reasons to investigate the crimes, even the detectives. They drink coffee and discuss the impending end of the world. Most of the police service focused on patrolling the streets.

Death of an insurance agent Peter Zell initially is ruled as suicide. He is found hanging in the toilet at McDonald's, or rather «It's not even a real McDonald's. There are no more real McDonald's. The company folded in August of last year, ninety-four percent of its value having evaporated in three weeks of market panic, leaving behind hundreds of thousands of brightly colored empty storefronts. Many of these, like the one we're now standing in, on Concord's Main Street, have subsequently been transformed into pirate restaurants: owned and operated by enterprising locals like my new best friend over there, doing a bustling business in comfort food and no need to sweat the franchise fee.»

However, a detective attached to the case, Henry Palace is troubled by some discrepancies in the death of Zell. And while colleagues recommend Palace leave Zell’s death as a suicide, a young detective continues to dig up the truth.

Not being an expert on apocalyptic fiction, I can not say with certainty that this plot had not already been used in the literature in the past, but I do not think the idea is a new one. The initial premise of the novel has a direct effect on a mystery plot. Is death of Zell associated with end of the world or he had some other motives for suicide\murder? Actually a mystery plot is the meat of the novel, and apocalyptic background is an essential part and fuel of the story.

Each plot twist is invariably associated with a future disaster, suggesting that Winters is very skillful writer.

Clever mystery, a good start to the series.