The Book of You 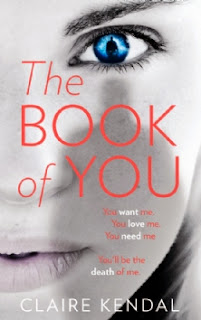 Claire Kendal
The Book of You

Middle-aged woman Clarissa Bourne parted with longtime lover after unsuccessful attempts to get pregnant. Shortly after broke-up Clarissa meets at a book launch party with the author of the book Rafe Solms. Rafe asks to walk Clarissa home, she agrees and wakes in the morning in bed with Rafe, but with no memory of the events of the previous night. The protagonist of the novel is convinced that Rafe slipped something in her drink, and then raped her. Clarissa hopes that she will never see Rafe again.

However, this man begins to follow her everywhere, to the university, where Clarissa works as an administrator, to shops, to railway station, from which the heroine every day commute to work. Realizing that she deals not with the persistent suitor, but with a stalker, she takes from Help Center brochures with tips on how to behave when faced with the stalker. Remembering the incident with the theft of a bag in her childhood, when the police tried to dissuade Clarissa to press charges, the protagonist realizes that the police will not help her. Then, following the advice from the brochure, the heroine begins to ignore her stalker and starts a diary which she calls "The Book of You”, documenting in the first person all the clashes with Rafe, all his gifts and threats.

When Clarissa is selected on a jury duty in the rape case, the heroine happily agrees to leave the job for seven weeks of trial. Rafe will have less opportunity to stalk her. Trial situation is somewhat reminiscent of Clarissa’s. Young woman of dubious reputation was abducted in broad daylight, the suspects brought her to the apartment, where she was drugged and raped by several men.

This debut by British first-novelist can be labeled retro. It is not just the story, though the novel obviously belongs to a special sub-genre "woman in danger", but rather credibility. The novel’s events would have looked naturally in the thriller written by a woman in the middle '40s: the lack of friends, relatives and distrust of the police could make the heroine alone run from moderately dangerous stalker. Novels of thattime were full of suspense half mixed with sentimentalism. But the novel is published in 2014, and these cat-and-mouse game with obsessive stalker are hard to believe in. Eventually the maniac is academician and not a sadistic drug addict with two previous convictions.

Questionable credibility would be small disadvantage, if not more ambitious miscalculations from Kendal. In hernovel, she alternates between the first person (for diary entries) and third (for everything else), although this narrative choice is not justified. Third person does not give a broader view of what is happening, and diary entries are too emotional to qualify as documental for the police.

Kendal handles the plot not too confident. In the first half of the book tension builds, forcing turning pages faster and faster, but by the middle of the book the action begins to sag. The essence of Rafe’s personality becomes clear, but the author continues to write the monotonous prose. So the book would have benefited if it were a hundred pages shorter.

And if a large part of the plot is based on the coincidence, the presence of a secondary storyline, trial part, is generally unjustified. Scenes from the trial are boring, and the constant abstraction of Clarissa only gives reason to believe that the jury’s decsions are irrational since jurors are immersed in their own problems. This plotline extends novel, but adds no depth to understanding of the protagonist.

Finale is disappointing: throughout the book there are hints of some twist in the end, but it all comes down to the usual tedious and tiresome action. This only confirms Kendal’s questionable talent as a plotter. The first half of the novel is intriguing, but in the second half the novel is falling apart.