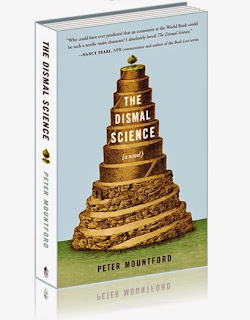 Vincenzo D’Orsi is a Vice-President at the World Bank and a widower. Once a year, the board of the Bank is going to Washington to discuss the Bank’s working directions, but for the most part these meetings are of a formal nature. Managers and bankers are going to share rumors, talk about their lives, just having a drink with old friends. The Bank operates almost by itself. a The meeting of the Bank falls on Thanksgiving, and Vincenzo spends holiday in the company of his daughter Leonora, who came specially from New York, where she lives after graduating from the prestigious college and working as a waitress in a cafe, and his closest - and only - friend Walter, a journalist of The Washington Post. Walter and Vincenzo know each other more than for 20 years, their friendship began with a short interview that Walter took from Vincenzo. Now both friends already are in their fifties, and they have worked at the same place all their lives.

Everything changes for Vincenzo after his meeting with Hamilton, an expert on South American direction. In Bolivia a new president was elected, and he is the opposition to the candidate backed by the Americans. Now Hamilton asks Vincenzo cut help to Bolivia, fearing that Bolivia would seek to escape from U.S. pressure. But Vincenzo refuses to fulfill the request of colleagues. Hamilton begins to threaten Vincenzo that he would lose his job, while Vincenzo in turn threatens to go with this story to the press. Communication with the press is secretly prohibited in the Bank, and both Hamilton and Vincenzo understand that it will lead to Vincenzo’s retirement.

By evening Vincenzo decides to summon his friend Walter and talks about the pressure on him. The next day, an article has been published, which also becomes a statement about Vincenzo’s resignation.

The Dismal Science is written in the third person, and its protagonist is no longer a young man, only taking first steps in the world of finance, but an experienced man with a midlife crisis, a dead wife and a troubled daughter. Vincenzo gradually reopenes his past: from gragmented memories we learn about the injury of his daughter, and then about the death of his wife. Fully spent his life on work and career, now 54-year-old protagonist realizes that he missed the family while he had it. Now the hero is trying to regain his private life, but does not know how. Amusing to read a few scenes in the novel where Vincenzo is given advice about how in today's world to date.

Mountford draws in his novel a complex character. Vincenzo is a strange, he is apparently a coward (he cares about his pension, he tells the bank lawyer to got to hell, but only after signing the contract, retaining his pension). The subject of confrontation of the world economy and the individual in the novel leads to the creation of a nontrivial intrigue: what really was the true cause of this challenge? Was it an impulse, temporary insanity, or clearly thought out move? What drives people to do making vital decisions? Can one person change the state of the world economy? The Dismal Science is a charming portrait of an egoist, and not just egois, but egoist with a midlife crisis.

Mountford particularly surprised me by the inclusion in the novel a black CIA agent (supposedly a CIA agent, because he officially doesn’t tell wether he is CIA and or another secret service), simultaneously parodying spy novels and inventing a new type of a CIA agent, who does not need a gun or a license to kill, enough to know how to intimidate.

Mountford with this book confirmed that he's a gifted writer: he writes books that are read with pleasure and long remembered.