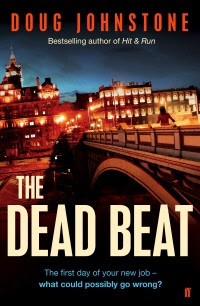 Martha Fluke begins to work in Edinburgh newspaper The Standard as intern, where, until recentl, her father Ian worked. Martha barely knew her dad and now no longer will get a chance to know him better: a few weeks before the events of the novel Ian committed suicide by jumping off a bridge. In the opening scene of the novel Martha visits her father's grave, and then hurry to the newspaper’s office. There she takes place of an obituaries writer, writing about old people mostly, and it is desirable to ask the relatives to write about their late loved ones.

Martha barely has time to meet with the paper team (among staff is Billy, the hero of one of the author's previous books Hit and Run), as answers the call where at the other end of the phone man reads his own obituary. In the phone, a shot rings out, and Martha, horrified, reportes to colleagues what had happened. The case is even more puzzling when it turns out that the caller is staff obituaries writer. Martha and her colleagues hurry to suicide victim’s home and even manage to save him, calling an ambulance, but not for long. Everyone agrees that Gordon who shot himself suffered from depression and the reason for his departure from life understandable. Only Martha is not so sure about the death of Gordon: where did Gordon get a gun? And what a noise she’s heard on the phone after the shot?

Doug Johnstone grows with each book as a writer. He is an accurate observer, a good stylist, he has the ear for dialogue. The first chapter of the novel is a showcase of the whole novel, and it shows what Johnstone is capable of as a stylist:

«She read the inscriptions as she went past, and worked out the age that each person had been when they died. Eighty-seven, sixty-two, thirty-nine. Dead person bingo. The old-timers, fine. Twenties and thrities, ah well. One teenager, that made her think. She was older than a corpse.»

Generally the first half of the novel is a strong literary novel about the life of young journalists in the world of surviving newspapers. Mysterious call and newspaper journalist’s suicide in the context of the first half of the novel look like side effects of the profession, and not as an element of domestic thriller. Johnstone is in his natural sphere, when he writes about the youth. His protagonists are in their 20s, they enter adulthood, but still have not lost enthusiasm and courage of the youth. Alcohol and drugs accompany the book's characters in almost every chapter.

Johnstone is interested in the topic of fathers and children, or even, parents and children. Martha learns about her father’s past through his music recorded on tape (she even walks the streets with the old "walkman" on) and vinyl, but also has a difficult relationship with her mother. Together with her brother Martha tries to call her mother by name, which greatly irritates the parent («You called me Mum by accident, isn't that sweet.»).

But if Johnstone’s book themes matured, the level of plotting remained on the same, not the highest, level. The author methodically builds world of the novel, making it as close as possible to the reality, and then suddenly pumping in there gallons of pulpish atmosphere. The plot tilts to the side as far away from the credibility, the characters begin to run erratically, logic disappears. Two author’s previous novels suffered from the same problems. Absurd plot in them completely subdued quite realistic drawn characters.

In order not to pervade this review with spoilers, I only say that the final third of the novel like is from not really good pulp story. When one character-villain is told that suicide victime didn’t die this villain replies:

That's really how the villain from the pulp could answer (except for the word «fuck»), but not in real life.

The Dead Beat seems to indicate that the author should either properly next time work on a plot, or even leave thrillers and write "serious" prose. This is what he does much better.