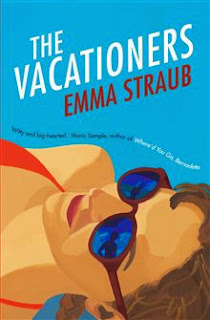 The Posts leaves stuffy Manhattan to Mallorca to spend two weeks in the house of a friend. Posts at the same time are anticipating the holiday and the sea in Spain, but not sure that it will solve their intrafamily problems. But tickets have already been booked, and posts are not going to lose money.

Jim and Fran Posts should celebrate 35th marriage anniversary, their youngest daughter, Sylvia, just graduated from high school and is to college in the fall, and in Spain, Sylvia’s older brother Bobby and his girlfriend and Fran’s best friend Charles and his husband Lawrence will join the Posts.

Each of the guests are planning to spend time usefully. Sylvia wants to take Spanish lessons from a tutor, Jim to has a little workout, Fran to do research for her forthcoming book, Charles and Lawrence to have a break from the madness of the office, and Bobby intends to ask for money from their parents, and his girlfriend Carmen wants Bobby to finally mature.

The original idea of the book is not new: the remote location of the house, gathering of relatives, family secrets rushing out - we have already seen all that. But if in the literature repetition would be banned, we would expect a sad fate: over the centuries there have been written only two dozen books - tops.

Emma Straub plays on semitones, helps the trivial with the sense of humor, though, of course, walks a thin line. This line lies between the commercial literature and literature big and serious, that chasing not the profits, but meaning and recognition. Selection of characters here is entirely of moderately smart novel for women: husband and wife are necessarily writers, kids are cute, but dependent, and the presence of gay couple is required, the landscape is European on top of things, to have material for jokes and sights to see.

This collection of characters could drown any, the most solid, novel, Straub, however, makes these absurd characters to play to her advantage. Moreover, it makes all the characters sympathetic. Each of them individually is either a snob, or a bore, or a coward, or cad, but together these combinations of emotions, human types and qualities makes the whole company surprisingly lively. Straub brings us to the idea that people are not perfect, and that makes them human.

Vacationers in the first place is a book about the complexity of human relationships. Even within one family, the minimum unit of society, there are so many compromises, laws, rules, tacit agreements, I’m not even saying about entire nations.

Straub makes us realize the seriousness of our emotions and feelings, but does not do it with the stern face. Her characters are comic, though they hardly realize it. The novel’s humour is aiming, such that the book does not sink to the level of family romantic comedy.

You can call Vacationers beach reading, the book won’t loose its distinctive qualities.