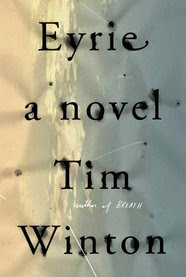 Perth, Australia, our days. Tom Keely lives alone in an apartment building in a poor neighborhood. He's almost 50, he is divorced, childless, he is out of work. Keely was once known environmental activist, he even appeared on TV screens, the newspapers and magazines wrote about him. But after a conflict with officials, he lost his job because he refused to cover the illegal actions of the authorities. Keely issued dirty linen in public, and now no private company wants to hire him, not to mention the state.

Keely lives on some savings and money from the sale of the house. All that he can afford is a small apartment in the seedy neighborhood. Keely worsens his problems with alcohol and regular antidepressants. Most of the novel we will be see Keely either drunk, or on pills, or hang-over.

Keely rarely comes from the apartment, speaks to no one, occasionally swims in the ocean. His mother Doris, a successful lawyer, and sister Faith, working in the financial sector, worries about Keely. He assures them that he's all right.

Everything changes in Keely’s life when he unexpectedly meets a woman, which resembles someone, in the building,. She is Gemma, a girl from the past. Now Gemma is in her forties, and she raises her grandson - a strange boy with no less strange name Kai. Keely is surprised by this meeting, he did not even know that Gemma lived in the same house with him just down the hall.

Despite its length, Eyrie reads in one breath. That’s not surprising considering that Winton has written 25 books already. The secret of success here is that the book equally attracts with its plot intrigue and an ability to write about everyday life.

Winton pushes his characters to an almost impossible situation, making the novel very dark and kind of depressing. Heroes fall into a trap, and all their actions and attempts are doomed. It is important not to lose the human face, not be on the same level with animals, those who prey on the main characters of the novel.

Despair largely even comes not from an external source, i.e. criminal elements, but from life itself. Keely after his fall from the top steps on the lowest rung of society, at his age left with nothing - except the conscience and moral attitudes. He largely looks up to his father, who was a priest and really saved people. Keely is also trying, but realizes that he lacks hardness. And his moral values are his own ruin. Because of them, he does not fit into society, can not keep in touch with other people.

Actually everyday life stifles Keely and Gemma and the like. They are honest, strong-willed people who simply can not cope with the system. Everything is against them. Toward the end of the novel Keely pawns his computer equipment to the shop to get a little cash. Clerk gives Keely a hundred dollars less than usual just because Keely looks, due to stress and alcohol, as if he were a junkie.
Crime story takes a turn in the second half of the book, and in the first Winton depicts Australian life of bottom. The novel is written in the third person, but such that it is similar to the first. And the voice of Keely is simultaneously resentful and angry at society (and himself), but also from bitter at his own impotence and unwillingness to change something. Such bitterness in his voice helps make the novel drive, when seemingly nothing happens, other than sitting in a stuffy room, swimming in the ocean, a short phone talk with the sister. Descriptions of hangover here are gorgeous, extremely realistic and somewhat painful. It is a rare thing.

“He peeled back the lids with a gospel gasp and levered himself upright and bipedal if not immediately ambulatory. Teetered a moment in the bad weather and shapeless mortification of something like waking consciousness. Which was heinous. Though in the scheme of things today’s discomfort was the least of his troubles. He should be glad of the distraction. This little malaise was only fleeting. Well, temporary. Just a bloody hangover. But for all that a pearler anyway, a real swine-choker. Even his feet hurt. And one leg was still intoxicated.”

In the novel there is no quotation marks at the dialogues, they are part of the main text, but the dialogues are actually Winton’s strong point. It’s difficult to write a believable dialogue between child and adult, and Winton makes it believable.

Eyrie’s action takes place in Australia, though the novel is rather a hybrid of literature of the three countries. From Australia there is destroying heat and large spaces, from English literature dialogues and britanisms and from the American prose the story itself.

Winton is a brilliant stylist, a good storyteller, and his novel is a great success.