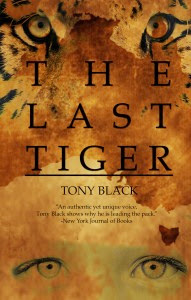 In 1909 a ship with the settlers comes to Tasmania. Among them is the hero of this book, a boy with a Japanese name for some reason, Myko, and his parents. Myko and his family are refugees from the Lithuanian town of Sakiai, oppressed not by the Bolsheviks, but by the Tsarist regime. The story of emigration will be revealed gradually, in parallel with developments of the plot on distant Tasmania.
Having sold his watch to a pawnbroker, Myko’s father Petras produces money for food. He and his family will live in a small community where all residents raise sheep in order to live. On arrival to the camp, Myko and his family listen a lively story about local beasts - tigers, which are setting fear in people and hunt the sheep. Tigers do not eat carrion, and only drink the blood of the murdered victims.

The family immediately is drawn into work. Father with men are watching sheep, Myko helps with the housework, and the boy's mother washes clothes and prepares food. Myko meets his first friend on a new land - a girl Tilly. She will remain his only friend, and indeed on the island it seems there are almost no children.

Scotsman Black tries himself in the genre of historical drama, which is quite unexpected. Black started with crime thrillers about an alcoholic\washed-up journalist\P.I. Gus Dury, where violence, strong language and whiskey flowed freely, and then switched to the police procedurals. Black in his crime novels kept two features from book to book: he always wrote short and biting prose, but he had problems with plots. Energetic style and moderately sympathetic protagonist make the writer's books quite enjoyable, but I was often disappointed.

It was quite a surprise to read The Last Tiger, in which there was practically nothing from the former Black. Broken style is replaced with the correct, proper-styled prose and obscene language disappeared from the author's prose at all. And it is possible to accept the result: only talented writer can have so radically changes in the style and theme.

Modified style has not not slowed down dynamic prose. From the flaskbacks of the protagonist we gradually learn the background of the family runaway and the secret of disappearance of Myko’s younger brother, because at the very beginning of the book we do not know why of the two brothers only one came to Tasmania. Both storylines keep the suspense until the very end. Emotional tension is what Black has always been able to create.

Perhaps I shall seem overly demanding, but for me the story was too simple. The book lacks any other secondary plotline or some plot twists. But Black in his previous books didn’t have complex plots.
The novel still captivates with a morally clean protagonist. Rarely we see in today's prose a character like Myko, experiencing someone else's tragedy, able to feel the pain of nature damaged by humans.

Not quite clear to me were a few moments in the novel. If Myko’s family arrived on the island from Lithuania, what language did Myko speak so he could easily socialize with other settlers? And what kind of repression has been committed by the Tsarist army against the Lithuanian families? The Bolsheviks had not yet come to power. But this is perhaps my gap in Lithuanian history.

The Last Tiger is a novel not without flaws, but a radical change in the author’s direction is the cause for applause.