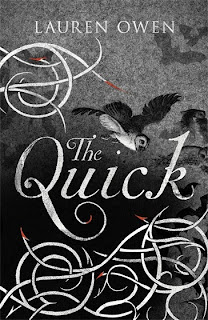 Publisher’s blurb beats around the bush, promising a sea of secrets, the atmosphere of Victorian London, epic scope, but is shamefully silent that this novel is about vampires. Bloodsuckers here are the same as in other works of art. They drink blood, die from silver, but almost have no fear of daylight and garlic, hunt at night, and deprived of blood they hibernate. One can turn into vampire through bite, but only if the person gives consent. Without the consent one only dies from blood loss.

The center of vampires in London becomes a mysterious Aegolius club, which includes gentlemen in the exact amount of 52, rich and ambitious. It’s incredibly hard to become a member of the club, but no one knows what the club does and what purpose carries. Among the members there are several researchers who are engaged in a vampire body, strengths and weaknesses of a vampire. They make experiments on the club members and research the old books and try to write their own. Augustus Mould keeps a diary during these studies, and from his writings we learn the essence of the club.

The novel begins not with the Aegolius club, but with the county home, once owned by a wealthy family. Brother and sister, James and Charlotte, were raised almost without parents. Their mother died, their father is out somewhere and servants mostly watching the house, but not the children. Charlotte herself teaches the alphabet to the younger brother: he’s nine years old, and he can not read and write, and hasn’t never been to school. Soon their father, terminally ill, returns home, but quickly dies. One of governesses minds the brother and sister, sends them to school. James then leaves to study at Oxford, and Charlotte remains in Yorkshire with the governess, turning into an old maid.

Was all this publishing disguise (and the author’s, too) worth it? Unfortunately, no. Lauren Owen does everything to hide vampires and give instead of a vampire thriller something sublime. Bloodsuckers here practically are never called bloodsuckers, the word "vampire" is used about five times in the novel, scenes of bloodsucking there are even less. Frustrating, of course, is not the mere presence of vampires, but banal interpretation of the theme and the absence of at least some attempts to refresh the material.

The novel’s main intrigue, associated with vampires, flashes with fake flame and immediately dies out. The Aegolius club and its leadership intentions extension: turn into vampires English high society. But after failing to turn Christopher the plan somehow is aborted. A sound strategy is instantly forgotten, but half a club begins hunt for James, who holds no strategic value. It turns out that the central plot device is pathetic plot device to explain James’s turning.

Generally, all that is connected with the club, is not subject to any rationalization. What is the difference between the Aegolius and the Alia – Owen does not explain, how vampires get along with the rest of the world, despite the fact that the phenomenon of vampirism is widely discussed and, apparently, even accepted as something that really exists – it is not clear.

Chaos reigns not only in the structure of the world of vampirism, but on an example of one vampire in particular, James. Withdrawn and self-taught poet suddenly turns into a sort of Batman, hiding under the cover of night, tearing the fetters, undending bars, breaking faces of nasty bloodsuckers. At the same time, it is not explained how a vampire abstinence works. How a vampire can refuse the call of the blood, why does he necessarily seek first his relatives? The flight and pursuit of James lack elaborate motivation. The club could easily kill James, finding him in a few hours - after all the club has 52 members. And if James promised revenge for the murder of his lover, why he went into hiding? It would be logical to see how he plans his attack.

It is sad that after the flight of James from the club and Charlotte’s coming to London, the novel loses its last remnants of Victorian charm, sinking to the level of a banal thriller. Philosophy gives way to smashing heads, torn feet, point blank shots, glasses full of blood. Even fragile Charlotte, rustic homebody, starts shooting with two hands and run faster than the wind. I'm afraid that the balance has not been met.

Yet the novel is worth reading - but only the first two chapters of childhood of the brother and sister (it’s like a separate story) and of the life of James with Christopher. This is a poignant prose about lost young people not accustomed to life in society. The first chapter explains wonderfully the special affection between the brother and sister and brother’s later fascination with literature.

Supporting characters in «The Quick» are flat, but even the main ones Owen clumsily handles. She has a habit of changing the name of the character, which confuses the reader. The author for entire chapter (or even a few chapters) calls the character by his last name, not mentioning at all his first name, and in the next chapter Owen suddenly begins to call him by first name. So, for a while it is not clear who is who.

The first chapter should’ve been published as a separate story, the rest is throw into the basket.