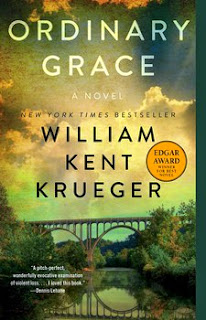 New Bremen, Minnesota, 1961. The narrator of the story recalls the events of that summer that forever changed him and his family. Frank Drum was then a 13-year-old teenager, a future hooligan. Frank’s parents are a minister of the Methodist Church Nathan, a veteran of World War II, and his wife, Ruth, not supporting her husband in his faith - she was once married to a lawyer, and after the war he decided to become a priest. Frank has a younger brother, Jake, who suffers from stuttering in public, and an older sister, Ariel, who graduated from high school and is now going to go to college.

Frank recalls that that summer was full of death. It all started with the death of the boy Bobby Cole, slightly retarded, who loved to play on the train tracks. There he died when he was hit by a passing train. The police ruled that it was an accident, the boy most likely went in a state and did not hear the train coming.

The second death in the town is not so shocking to people. While playing in the woods, Frank and his brother notice two men, one of them is as if asleep. Awake stranger beckons to the boys and says that other man is not asleep, he is dead.

The town has a few strange outsiders, which society does not accept. This is brother and sister Lise and Emil Brandt. Emil is a blind music teacher, a war veteran with a burnt face. He writes his memoirs with the help of Ariel Drum and also teaches her piano lessons. Lise Brandt suffers from mental health problems, she is unsociable, doesn’t allow to touch her. Nathan Drum often plays chess with Emil, and Jake in the garden helps Lise, he's the only person she trusts and allows him to touch her.

William Kent Krueger has taken a break from his regular series writing this stand-alone. Ordinary Grace virtually is a murder mystery, but in fact it’s a deep novel about growing up and life in a small town.

Death at the beginning of the novel is not woven in central intrigue, but plays on the atmosphere. In a small New Bremen the most serious crime is a drunken brawl in a bar (which we see as the beginning of the novel when Nathan Drum goes to jail to take his friend Gus). And when something more serious than a drunken brawl happens the clouds over the city start gathering. Nathan Drum only manages to read the service for the dead, and his speeches really grab the soul, making you think about life and death, not just a formulaic prayer.

The narrator Frank also has death on his mind. In his narrative there is a lot of wisdom and thoughtful observations about the state of things. Frank’s father profession appeals to the topic of religion, and disbelief of Frank himself becomes a counterweight to this religiosity. Religion is woven into the novel matter, but does not become the cornerstone of the book. This is just one of the topics, but not the main one.

An important topic becomes a social structure of a small town, its population’s suspicion towards those who stick out of crowd. Lise and Emil Brandts obvious are outcasts due to their physical and mental deformities. Except tolerant Drums, they have no one who had for them help and sympathy. People of Indian origin are also considered strangers in town, which was formed by the descendants of German colonists. Only because of their race Indian Redstone automatically falls under suspicion.

Krueger reproduces the sixties in detail, but these details are more convincing than some of the characters. So, rowdy component of Frank is doubtful. He spies on a neighbor who is walking around in the underwear, sometimes swears, makes his brother beat someone else's car with a bat, but it is rather an exception to the rule. Frank is still honest and fair boy, sympathetic and vulnerable.
Beautiful prose and the atmosphere of tragedy would not have saved the book, if it failed like a mystery. Krueger successfully solves the puzzle, playing by the rules: all the evidence is in plain sight, you only need to think hard. Krueger does not overcomplicate the mystery plot, but it’s not too simple either.

The novel deservedly won the Edgar for Best Novel (although the award seriously tainted its reputation in recent years, nominating such works that were not supposed to see the light of day at all). There is nothing ordinary about Ordinary Grace. Brilliant.