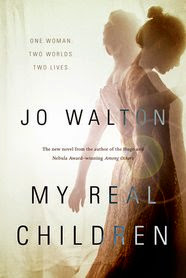 2015. Patricia Cowan is an old woman suffering from dementia and is in a nursing home. She almost does not respond to surrounding reality, but she remembers the events of the past. But is how much of these memories are truth, and what is fiction? Patricia remembers that she once lived two lives very differently. So, in alternating chapters, we will be reading about the two lives of the protagonist.
Two alternative lives in two worlds will have one turning point, and prior to that Patricia’s past is monolithic. She was born in 1926, in a small English town, and was the youngest of two children. Her brother Oswald was her senior by three years, he was also a favorite of his father. When she was 13, Patricia was sent to school in Carlisle: because of the war the population of Britain began to move in a more secluded area. In 1943, Oswald was killed in the skies over Germany. Due to the large number of men killed in the war, universities increase the quota for girls and women. Because of this, Patricia arrives in Oxford, where he studies to be a teacher.

On the third year Patricia tries to overcome his shyness, begins to attend parties, until she meets a freshman Mark, clever but shy young man as well. After the first conversation, Mark asks her for engagement, and stunned Pat agrees. By that time Patricia completes his studies, moves to Cornwell, where she begins to teach at the school. She rarely sees Mark, but he regularly writes her passionate letters that Pat carefully preserves. In 1949 Mark does not receive a grant for further study of philosophy. He has no money for the wedding and means to support his wife. But on the phone he asks Patricia to marry him. Here's the turning point.

In one universe, Pat answers yes and they immediately play a modest wedding, in another she says no, and they are breaking off the engagement.

My Real Children is nominally science fiction. The author indicates the year of the near future, which automatically places the novel to near future SF genre. But if you look closely the fantastic element is almost absent here. When we read in the beginning of the book that the main character is a very old woman suffering from dementia, we can assume that everything she tells us could not have happened at all. The woman is obviously confused - and unwittingly misleads the reader. Her dual memory can be attributed not to the existence of alternative universes, but to a banal disease, damage to the brain.

If we accept the fact that the main character Patricia really lived two lives in different universes, then we do not find in the novel explanations for the turning point. Walton only indicates the time in which the path diverges. In her book Walton will use an interesting technique: for each change within the family of Patricia there will be a change in the world. Patricia’s child is born, there is an explosion of a nuclear bomb. Son went to college, marijuana was legalized, etc. This technique, which may have unintended, suggests about the causes of the turning point. It’s not external events change the life of one family, but internal events in the family change the world. If there was a turning point from one Pat’s verbal choice (now or never), then everything else can vary depending on our choice.

The first half of the novel is an interesting portrait of a young woman in post-war society in Britain. Wartime atmosphere conveys the one scene where, due to train delays, Pat is forced to stay at the transfer station, and the sympathetic people who have just met with Pat, invite her to spend the night with them until the next morning.

Further parallel stories attract not only by the detailed psychology, but also by the analysis of our life decisions. One word can make our lives miserable, and one word can lead to happiness, but not immediately. That universe where Trisha married Mark is filled with the spirit of hopelessness. Portrait of family tyranny turned out extremely realistic. That's why the other storyline, where Pat and Bee became lovers, is not as good, lacking the psychological subtlety. Walton almost avoids theme of children in same-sex marriage. When Pat and Bee’s children grow, we do not see them in the relationship with their parents. Walton does not allow analysis of the division of responsibilities between partners, does not put the problem of equality between children, and a rare presence of Michael, the biological father, in the family is reduced to the fact that Pat and Bee call him uncle to their children.

The final part of the novel suffers from the syndrome of family album. Walton said almost all in the first part, and the remaining 100 pages is needed only to push the plot to its logical end.

Walton ceases to dig deep, limiting herself with monotonous and tiresome narration: this son married, this daughter gave birth, that boy was admitted to Oxford, wrote this hit. From the abundance of events and names you start feel dizzy. Children in the novel still haven’t become real – complex characters. They remain types with labels, erased persons, which the main character would try to remember.

This novel is well worth reading. It's a smart, lively, inspiring, although suffering from undevelopement of the characters.