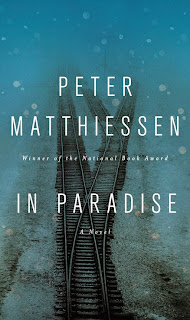 The novel tells the story of a weekly pilgrimage, when in 1996, at Auschwitz 140 people gathered to meditate, pray and remember the victims of the concentration camp. Among those who are stationed in the barracks where they SS officers once lived are priests and children of Nazis, relatives of dead Jews and elderly camp survivors, researchers and scientists. One of the pilgrims is the protagonist, 55-year-old academician, American scientist Clements Olin studying poetry of victims of concentration camps and composing poetry collections. Although Olin has devoted much of his life to studying the Holocaust, he can not say he has any special knowledge. You can not be an expert on the subject, if you personally weren’t at a concentration camp as an inmate.

Olin convinces himself that he came to Auschwitz to gather material for a book, but this is only a formal reason. The protagonist himself is not sure who he is and what he wants from his pilgrimage. Not sure and the rest of group. Every day they are gathering to pray, inspect dilapidated buildings, railroad tracks, ovens and gas chambers, talk about themselves and their stories, which led to the retreat.

The participants discuss a variety of topics, from religion and patriotism to Jews and Nazism. Every day some new topic is raised that leads to bitter disputes and discussions, considering how different the audience gathered at the camp site is.

In Paradise is an uncomfortable novel. It’s uncomfortable for everyone, the reader, and the heroes of the novel. Holocaust requires sensitivity. Holocaust does not recognize the hypocrisy, but tearful and compassionate feelings are also irrelevant. When faced with such a monstrous crime against humanity, you are inevitably lost, so literally you can not understand who you are.

Olin’s personality is revealed in the novel not immediately: the first few chapters Matthiessen presents us the main character as an outsider, a stranger. The mystery of personality is one of the main themes of the book. Every pilgrim in the novel reveals oneself thus as he wants. Everyone has prepared beforehand the reason for his pilgrimage, but the reason is most often contrived. The pilgrims either do not know or do not want to know the true reason.

Discomfort is a basic feeling the book causes in the first half. Minor characters one after another raise important issues related to the war and the Holocaust, and these themes in any other society or any other place would never have been touched, they are so painful and uncomfortable. But at the ruins of Auschwitz pilgrims have nowhere to go, and they came to pay tribute to the victims, and to understand something that worries and haunts them. Reading a novel, you feel yourself like one of the pilgrims who hear other people's speeches, noting courage of ones and hypocrisy of others. And along with Olin you can only agree that without being a direct participant in the tragedy, you do not have the right to an opinion and can’t add anything new.

The first half is full of suspense and verbal sparring but as the second half of the novel begins, it is like a completely separate thing, much weaker than the first. Matthiessen is as if exhausted by the main theme and went on less significant ones. The protagonist suddenly switches from a concentration camp to love affairs, which puts reader in another awkward position. Matthiessen sort of moves the place of the death of millions of innocent people in the area of the love affairs. The hero rational core ( and author’s) is gone somewhere, rationality giving way to feelings.
But it is still possible to forgive the author: lone hero could still feel a craving to another person in such tragic place. Difficult to explain the change of course in the final third of the novel. The author reserves the Holocaust behind, switching on the theme of the Catholic Church. Suddenly priests, insider’s intrigies and topic of pedophilia come to the first row. This turn of events is at least strange.

The final Olin speech before pilgrims also could be questioned. The speech is too staged and puzzling. Olin again loses his rationality, muttering something about "Polish Jews." And though his origins Olin found only here in Poland, this can not be that in 50 years he never thought of his mother. Hard to imagine that such a reasonable man had no idea about his Jewishness, when everything pointed to this.

I’m again feeling uncomfortable: how good first half of the novel was, you’re at discomort to critisize it, but otherwise it is impossible. Verdict: read the first half, skip the second.