Your Fathers, Where Are They? 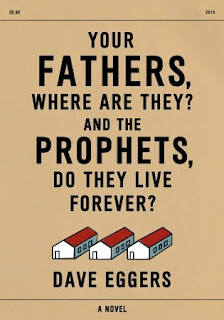 Dave Eggers
Your Fathers, Where Are They?

The novel is written entirely in the form of dialogue and generally not very different from the play. A young troubled man named Thomas (he is slightly over 30) kidnaps an astronaut named Kevin, whom they once were in college together with. Kevin, of course, does not remember his kidnapper, but Thomas knows who Kevin is. Thomas brings the kidnapped astronaut on abandoned military base in California near the ocean and there he handcuffes Kevin to a pole. The kidnapper only wants to talk with former classmate, to get answers to his questions and promises Kevin to release him soon. The astronaut first swears, threatens, but quickly realizes that the threats are useless. He is completely at the mercy of his captor.

Thanks to leading questions, Kevin starts to remember Thomas vaguely. Back in college, Kevin has set a goal of becoming an astronaut and achieved his goal in a few years. Thomas always liked Kevin, saw him as his role model, the only man that can keep his word. Kevin played baseball for the college team, studied at 4.0, graduated from the NASA Academy, learned Urdu, was a fighter pilot, then became an astronaut, flew into space and planned to get on the Shuttle, when the government canceled the U.S. space program. Kevin is only the first in a chain of people abducted by Thomas.

Eggers always loved experimenting with the form. No less he was keen on politics: in his latest works there are increasing degrees of actuality. In Your Fathers, Where Are They? politics and prose enter into symbiosis, and the result is not the most impressive. For political expression the book is too one-sided and superficial, for the novel tiresome and predictable.

In his novel, Eggers addresses several topics of the day: useless wars, police brutality, budget cuts, pedophilia (along with pederasty, if you use Egger’s choice of words), inadequate parenting etc. The author seemed to be in a hurry and jumps on these topics as valiant steed, only engaging in a dialogue on one issue, as abruptly switches to another. Pressed (no other word for it) into the book are many different themes, only they are revealed too superficially. Eggers seems to be not a stupid man, and he does not know politics at all. He seemed to be grabbed an idea here and there, built his views and now passes them through his characters’s lips. Meaning of the dialogue is an exchange of views, which could change the point of view of another person. It is sad that no one in the novel has not changed his views. Thomas initially is frozen in his views on the world, and no strangers will not change him, and abducted people are less interested in what his kidnapper thinks. What a worldview, when you're chained to a pole. Thomas originally planned to find answers to the right questions, for this he has planned the kidnappings. But after the first quarter of the book, he loses interest in other people's answers, having to read lectures and blaming others for all the sorrows. Thus Eggers fails his original task. And if the main character already knows all the answers and will not change his point of view, then why bother with kidnapping of so many people? Thomas could easily tell his monologue, sitting in the kitchen.

Your Fathers, Where Are They? as a novel are too tedious reading. It’s starting intriguing (somebody steals an astronaut - it's just cool by any standards), and what follows diminishes the intrigue with each page. The reason lays in the main character, who, though an ill person, still pretty bad person. Nothing pleasant in listening to his self-righteous speeches, it's like to find yourself in an elevator with a stranger not happy with his life - the first two floors you sympathize with him, and you want to leave by the third.

After the first third, when it becomes clear that the main reason why Thomas committed the kidnappings, it becomes too boring. Eggers writes briskly, but the dialogue is still deprived of any spark. Perhaps the author did not have enough humor and self-irony. The story of the abduction to the finale becomes a grotesque parody, and the plot seemed to be written by some horror fan with a sick imagination, writing fanfic for some forum.

It's a shame that Eggers spent his talent on this one-sided, uninteresting novel. Fathers, where were you when you gave Dave the opportunity to publish this thing?