Whistling Past the Graveyard 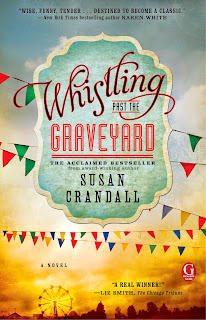 Susan Crandall
Whistling Past the Graveyard

Summer of 1963, Cayuga Springs, Mississippi. Nine year old Starla Claudelle lives at her grandma's house. Her father works at an oil rig and spends little time at home, and her mother had gone off to Nashville six years ago to become a singer, and now only sends rare postcards. Stubborn and independent, Starla is often punished by her grandmother Mamie for petty mischief. Despite Grandmother’s harsh words about her mother, Starla praises her mother and waits for the moment when she becomes famous and take Starla from her grandmother.

It seems like Starla doesn’t go to school. She studies a little at home, plays with the neighbor girl, kicks older boys, in the beginning even breaking the nose of one of them. For that Mamie grounds Starla on Independence Day, not allowing her to leave the house to watch the fireworks. Starla nevertheless is out of the house, plays on the playground, where a neighbor catches her. The neighbor threatens to complain to Starla’s grandmother, and then the girl, still in fear of harsher punishment, runs away from home and gets to the highway. Starla plans to walk to Nashville, finds her mother to live with her. Tired to walk, the girl changes her plan and takes a ride. A black woman named Eula on a truck picks up Starla, who are puzzled by a baby inside, a white baby. It begins to darken, and Eula offers Starla to spend the night at her ho,e, and in the morning Eula’s husband Wallace will take the girl where she wants to go. Starla agrees, but when he sees bear-like Wallace, the owner of bad temper and addiction to strong alcohol, the desire to spend the night at Eula’s house disappears. Wallace pulls his wife, baby James and Starla with force home and closes the door on all the bolts.

Whistling Past the Graveyard can be compared with fireworks: it’s, too, something noisy, incessant, kind to the eyes, catchy and colorful. The plot of the novel is as realistic as it is implausible in its fabulousness. I walked from my grandmother here is piling on rights of African Americans, dear, but distant Mother is a witch, and a nine-year girl giving battle to Ku Klux Klan.

Much of the credit that the novel was a success, belongs to the protagonist Starla. If she were not so independent, persistent and resourceful, all the adventures, sooner or later, would have turned sour, and would have made a moist cake of journalism and ordinary story of the runaway child. Crandall made Starla an insightful storyteller, but childishly naive, fair, but merciful. It's hard to write more than 300 pages from the POV of the nine year old child, so much so that it was authentic. Crandall gives Starla as much knowledge about the world as it is needed for the story. 300 pages look convincing, the final 30 are not quite. Actually, in the final pages, we read about the rights of blacks, Martin Luther King, protests, and here it turns into unconvincing journalism. Child will hardly understand this difficult matter.

The plot of the book is a whirlwind, flying swiftly, you do not want to be interrupted even for a second. But stylistically Crandall is more conservative and cautious. The novel is written in the southern dialect, but only to some degree. All the characters here, black and white, speak with dialect. And yet the author is afraid of losing literary style. Characters express themselves with something between a dialect and correct speech. So, illiterate people still express themselves not quite illiterately. Crandall gear ups on the dialect, then she reduces the pressure and the characters then almost completely switch to the literary language. We won’t find a complete authenticity there, but the novel reads without much effort.

Susan Crandall has written an excellent novel, which, if not placed in the annals of fiction of the South, then certainly delivers a lot of pleasure.