Lovers at the Chameleon Club, Paris 1932 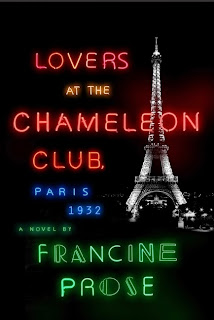 This novel is woven from several fictional documentary sources, from letters to memoirs, and tells the story of a real person - Lou Villars, a professional athlete, autoracer, lesbian and a spy.
Before us are letters to parents written by famous photographer of Hungarian origin Gabor Tsenyi, the author of the photo, which gave the title to this novel. Gabor is trying to make a living with the camera, making pictures for newspapers, but mostly asking for money from his parents, calling them Mama and Papa. The photographer suffers because his work is not recognized as art.

«I cannot go on like this! My days in journalism are numbered! I must find another way of supplementing your stipend, another job that will let me have my nights free to wander the city, taking pictures. It’s demoralizing enough to be demoted—or promoted, according to my editors—to the sports pages. But when I actually find a subject worth writing an article about, they refuse to print it.
Last week I attended the event described above. This time I only made a few tiny improvements on the truth. That sparkle of saucy feminine beauty was my invention, as were the hurdles and the bike. And Paris is hardly abuzz about Mademoiselle Lou, though they should be buzzing about this young woman who, in our country, would probably be exhibited as a circus freak.

I would never have heard of this girl if not for my friend Lionel. With typical directness—excuse the language, his, not mine—my American pal remarked that the sight of a big, healthy, muscular girl in pants, running and chucking a spear, made him feel like a happy bumblebee was buzzing in his trousers.»

Unrecognized genius is tormented by his uselessness, until two women, both in love with him, appear in his life. One of them is Baroness de Rossignol, wife of Baron Didi, who can kiss women, but prefers men in bed. Baroness starts to sponsor Gabor so he could open his own studio. And there Gabor can do the most laid-back photos, including photos of naked men in masks. The second woman in love with a photographer is Suzanne Dunois, his future wife, and later widow. Suzanne can not support Gabor financially, but offers him moral support.

Biography of Lou Villars is written by Nathalie Dunois, Suzanne’s niece, an emancipated lady of feminist tendencies. Her book is based largely on speculation and her own interpretations.

Lovers at the Chameleon Club, Paris 1932 in nature is meditation on a single photograph; complex poem; a dance around a photo. Each documentary source, that build the novel, has its catch and is a parody on the source. The photographer Gabor has a prototype, writer Maine is quasi-Henry Miller, and Nathalie Dunois is a collective image of ladies with higher education and creative instincts, who see everything through the prism of feminism.

Each of these characters is certainly strange, but pleasant, and each has its own unique voice. The novel even to some extent can be called an exercise in style, but the stylistic heterogeneity here is not cutting the story. Each fictional document, underlying the book, looks like original.

What eventually happens to the main heroine Villars is clear from the beginning, but the spirit of the book is not really grim. Yes, there are bile, jealousy, contempt, but all the characters are unsophisticated and nobody will disgust you. That’s true, of course, and for Lou Villars, which made her way from the ridiculous athlete to an almost executioner. Dunois the biographer is trying to find an explanation in the behavior and motives of Villars. Like, she worked for the Nazis from good intentions. Villars caused harm to some, so hundreds could be saved. She believed that protects civilians. And among motives the main is France is to blame, which denied Villars in sports, racing, depriving her of the joy of life, not allowing her to be who she is. But Dunois is a dim biographer, and one shouldn’t believe her. Are the reasons so important why a person becomes what he is? And was it all that simple with Villars, with her revenge to the country and the baron, when he refused to fight for her, the best racer of the country? This novel is a powerful statement about why you can not judge others.

Francine Prose won’t let you take a break from reading once you start. The novel radiates benevolence so that even the chapter about meeting between Hitler and Villars gives warm feelings.