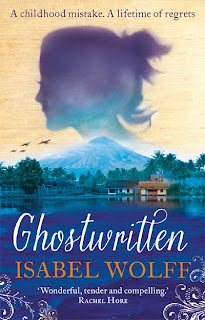 In the prologue, we learn the background of one of the two main characters of the novel. In 1987, at the English resort Polvarth a young mother has a nice time with her two children, nine-year-old Evie and five-year-old Ted. While the woman flirts with her boyfriend, kids are left to themselves. Brother and sister wander along the beach, catching crabs, climbing over the rocks. When the bell rings for the tea, calling travelers, Evie deliberately ignores the bell and her mother’s callings. The girl continues to walk off the beach, but what happens next, we do not know and can only guess that something happened with a little Ted.

Evie is now 34, and she now calls himself Jennie, a diminutive of Genevieve. Jennie has grown up and became a ghostwriter. She writes books for others, and she likes it. Jennie outlines the specialization of her work on the wedding of her girlfriend. Jennie herself is not married, but has been living with his partner Rick, a primary school teacher. Joining their relationship Jennie and Rick do not hurry to become husband and wife and not too sure about their future together. The problem is that Jennie does not want to have children. This is a key controversy that leads to the fact that the partners are not sure whether they will be together in the near future.

A business proposal from one of the guests from the girlfriend’s wedding gives Jennie a chance to think about the future and to rest from each other. A guest, an elderly man, has an old mother, Klara, who is 80 years old. This woman would like to write a memoir, but she does not know how to approach this. Jennie’s occupation is just perfect for Klara. The son hires Jennie, and she agrees to come to Polvarth to stay at Klara’s for 10 days, to record an interviews with Klara, to read and look through her archive of photographs, to interview friends and relatives. Although return to Polvarth will be painful for Jennie, she wants to overcome her fears.

Ghostwritten is surprisingly well-written fiction that someone may mistakenly call chicklit. If we label chicklit such novel like this, how we should label tens of thousands of other mediocre novels? Isabel Wolff has talent for storytelling and a style attentive to details.

What sets Wolff apart other writers about women is the ability to cut off the excess. Bonding between the interviews with Klara is written competently and accurately. If the characters eat, then we are not tireв with descriptions of all meals. If Jennie should interview, the author proceeds directly to the interview, cutting stylistic garbage as the heroine went to the cottage of his client, as she set up the recorder and so on. Jennie's storyline is not too long, and someone might be disappointed by the fact that Jennie’s secret is revealed after two-thirds of the book. This reduces the emotional intensity, even if we will have another secret in the finale.

We have to admit that the two storylines of the novel is not quite equal to the density of detail, but this was to be expected. What can be compared with the years of life in a concentration camp? Not much really. Nevertheless, Jennie and Klara are intriguing leads, although there had been a tragic childhood for Klara, her further life seems like a safe ride without problems.

Life of prisoners in Java Wolff studied hard, at least there no obvious blunders in the story of Klara. Jennie’s story raises only one question, namely in the publishing area. Wolff subtly avoids publishing details about Klara’s memoirs. For whom did Jennie write Klara’s book? Wil it be self published by the old lady? Or she found the publisher? The author does not give the answers, in the finale only to mention that the book has already been published.

And yet Ghostwritten has distant relationship with commercial literature. The story of each heroine of the novel is interesting in itself, and yet Wolff is satisfied with that and calculates her story. She brings these stories into one. By some coincidence, Klara and Jennie have a similar tragedy from the past. Wolff just needs this resonance between the two heroines, as if she is afraid that it would not be enough, that the reader won’t feel these stories by themselves. But the reader doesn’t need this artificiality in the whole story.

Isabel Wolff writes smoothly, sometimes elegant, above average. The entire novel is written very smoothly, without failures. And it just happened so that the strongest part of the novel is its prologue. Ten pages of some unearthly beauty. And the rest of the novel is trying to reach out to this prologue, but fails. Wolff set too high bar for herself in the prologue. It would have passed for a brilliant short story. Still, it’s a good novel. But only good, not great.