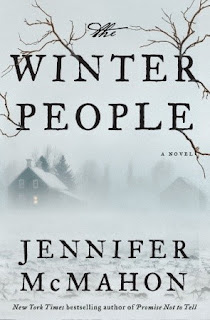 The novel begins with fragments of diaries, written in 1908 by Sara Harrison Shea and these diary pages will be later published as a hardcover book. One of the subplots is about the mysterious death of Sara and her daughter Gertie, another storyline happen nowadays, and in the center of it are two sisters, Ruthie and Fawn, whose mother Alice suddenly disappears one morning.

After a drunken night 16-year-old Ruthie wakes up from the words of her sister Fawn. Their mother Alice did not sleep at home and didn’t return home by the morning. Children's father died, and Alice, ex-hippie, raised her daughters alone in a big house in the town of West Hall, Vermont, located next to the wood and stone array, named the Devil’s Hand. Alice lived off the grid, grew vegetables and bred chickens, selling products at the market, for which she received the nickname the Egg Lady. Alice completely denied all modern devices, lived modestly, was very reliable and just could not disappear, leaving the children alone. Ruthie does not know who to turn to, and looks around the room for clues where her mother may have gone to. With her sister’s help they find a cache with a small pistol, a pair of driving licenses in the name of spouses O`Rourke, and a book of diaries by Sara Harrison Shea. Suspecting that the mother could be involved in something illegal, Ruthie does not report the missing mother to the police, and wants to find answers on her own.

First, it is worth noting that the book has not the most accessible structure. McMahon constantly switches between the characters’s point of view, change the third and first person, uses the direct narrative, the diary fragments, in addition alternating time layers, from the end of the XIX century to the present. I was not sure that the author would successfully implement a very intricate structure. I must admit that McMahon managed to build a house of cards-complicated plot, and it does not fall apart until the very end.

Perhaps only switch between Sara’s narratives are not quite justified. Part of her story is told through the diary and part through direct first-person narrative - and also in the first person. So, the diary and non-diary parts has no real difference.

McMahon is successfully controling paranormal activity in her book. In fact, The Winter People is a novel symbiosis between the mystery and the zombie thriller. Skeptics will find that the author leads us by the nose and there will be a logical explanation for everything, the dreamer will sweep detective elements as clouding otherworldly puzzle. The main point, in general, is that McMahon very sensitively handles evil spirits. People seem to see sleepers\spirits, but it can be attributed to a vivid imagination of a child or inflamed mind of a grieving woman. And when Sara brings her daughter back, the daughter communicates with her mother through knocks and notes, that are not the most obvious actions, pointing to evil spirit.

The book makes one guess until the very end, whether or not the dead could be ressurected. One discrepancy still exists: the essence of sleepers is not quite clearly explained, because it is not clear what these zombi-like creatures eat.

The novel entertains you with amusing secrets, in several places causes goosebumps, but goes not very high from the ground. McMahon does not strive for mysteries of the universe, keeping close to home. Heroes of her books are not all-powerful villains and superwomen, hacking their way everywhere. Ordinary people fall in complicated story with their little problems. Fawn is often sick and wants to play games, Ruthie wants to go to college, but due to lack of money should for a year stay to help her mother around the house and on the farm, Katherine has doubts about the fidelity of her deceased husband. Especially fascinating here are the dialogues between the two sisters. And in general the chapters on two days of life of Ruthie and Fawn during the mother's absence are the best in the whole book.

It’s a little disappointing that in the final quarter the characters lose all common sense and reason, otherwise how can we explain their trip into the tunnels where obviously something bad will happen with them. McMahon too easily, as in a YA fantasy, found a way out of the labyrinth plot. The finale adds a spoonful of tar, but does not spoil the entire picture.

The Winter People is a quality entertainment, a page-turner and smart horror.