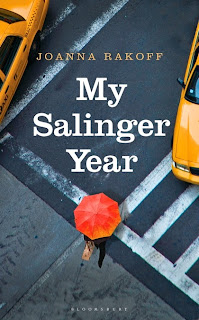 In the mid-90's 23-year-old Rakoff returnes from London, where she graduated from the university, to her native New York. Young graduate, she changes her plans to go to California, remains in New York, where she lives with her Marxist boyfriend Don in an inferior apartment, and gets a job in an old-fashioned literary agency which the book will be referred to simply The Agency.

Joanna was hired after one interview just before Christmas. She expects that her literary agent assistant duties will include reading manuscripts and search for literary talents, but mostly (at least in the early part of the book) she is doing what usually secretary does: return calls, typing documents, making decryption of recordings, answers to readers’ letters. The Agency, where Rakoff works, still does everything the way it was done in the 40s, when The Agency was established. All documentation is printed on a typewriter, a prehistoric dictophone with foot pedals is used, fax and xerox will appear in the office not soon, computer with internet access in the office will be put towards the end of the first year of Joanna’s work.

Rakoff’s boss, whose name we do not know, is an old woman who is antique as everything in the office. Besides Joanna’s boss, The Agency’s stuff includes several such old women, one of them resigns over the book course - lung cancer. The boss has several clients and talks on the phone with the same range of people, including a Jerry and another man, in which Joanna guesses her boss’s lover.
Joanna’s boss gives her some guidelines: not to give the address and phone number of Jerry to anyone, politely say generally everyone who calls about Jerry to stop calling, do not engage in conversation with Jerry, immediately switch him to the boss’ line. Rakoff does not immediately guess who Jerry in question is until she looks closer at the backs of books, standing in the office, and only then she realizes that Jerry is Salinger.

Rakoff’s memories partially can be attributed to the category of what is called "tangential memoirs." Writer of memories considers it his ot her duty to inform the world about his acquaintance, tangentially, pointing to some famous person. Accordingly, it often happens that the story of the memoirist has no value if it were not for this brief moment of crossing paths with the famous.
In this case, it is true, but not quite so. Salinger here really is included to attract attention. Rakoff did not read his books until she meets Salinger alive in The Agency office and essentially she had nothing to say about him as a writer. In the finale, the author begins an attempt to analyze the works Salinger, tells how they grabbed her soul, but it is not quite interesting to read and it gives a sense if not moralizing, the author’s just trying to impose her views.

Yet to dismiss My Salinger Year as a memoir of another writer trying to sunbath in the glory of someone else would be wrong. Because this book has its value and its charm, just from a different perspective. My Salinger Year is great memoires of the life of the literary agency, of bohemian life in New York of mid-90s. Rakoff's voice there has a passion, wisdom and measure. Her memoir is a sad notes with punching satire. If Salinger here had fictitious name, and you’d get a charming novel about a 20-year-olds. Rakoff has all the makings of the novelist. The book doesn’t have a pronounced plot (the intrigue with the publication of the book is not so clingy), but it is not a thriller, just a fragment of life of a young graduate.

Building up the image of Salinger and his readers (whose letters we read in the course of the book), Rakoff writes without snobbery, but with a bit of humor. Part of the humor stems from the fact that Rakoff first enters into adulthood and she doesn’t succeed at everything.

These failures, "moderate unhappiness", are rooted in the life style of the author. Her society is bohemian young people, with dreams of exhibitions and publications. Accordingly, the problems of the Brooklyn youth are quite peculiar. For these young bohemian people the book is designed primarily for, and that does not make it worse.

My Salinger Year is a voracious read, and its reading is accompanied by a healthy laugh.