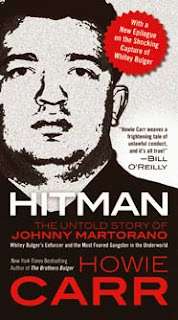 Boston organized crime scene was unique. The presence of the Mafia in Boston nevertheless allowed to exist independent gangs. To avoid a permanent bloody fights, Mafia in early '70s formed an alliance with the new Winter Hill Gang. This gang and its main participants are those «Hitman» had been written about.

Hitman from the title is Johnny Martorano, Winter Hill Gang member, on whose account there are more than 20 murders. But Hitman is not a biography of Johnny, for this author Howie Carr had too little information about Johnny. Hitman is a biography of the Boston organized crime scene since the mid '50s to the mid-2000s with the emphasis on Johnny’s personality, his crimes and his subsequent cooperation with the prosecution. Carr without haste tells about changes in the criminal world, following Martorano’s career growth.

Carr definitely has the makings of a novelist. Each chapter he tries to finish with scathing joke or a twist, as he weaves his narrative from three main sources – Martorano’s testimony at the trial, when he made a deal with the prosecution, Martorano’s autobiography narrated to Carr, and the actual information collected by Carr from different sources. Carr, perhaps, is not the best researcher (in his book, there are no references to sources, so some parts read like tales from the criminal world), but a successful collagist, and will make you laugh plenty of times.

Johnny Martorano’s story is full of exciting adventure, betrayal, intrigue, and what we should expect from the criminal world. There are corrupt federal agents, and Top Echelon informants, and daring assassinations, and escape from the law.

Martorano is probably not a typical hitman. First, he pleads not actually be a contract killer. He never killed for money. His murders were friendly help to other members of the group or the killing of informers. Secondly, Martorano was always responsible for his families and children and worked mostly to support his wives and children (earning the nickname Mr. Mom). Third, surprisingly, but the deal with the prosecution for Martorano really was a forced move. Deal with the prosecution in the Martorano’s case was not an attempt to save his skin, but a noble attempt to save the skins of their friends.

"You can't rat on a rat. That's the way I see it."- With this statement in the Martorano’s case it could be hard to disagree, especially when at stake the lives of your friends.

Hitman describes in detail exactly how contract hits were committed, that is another definite plus. This important for understanding the structure of the criminal world book is definitely worth reading.