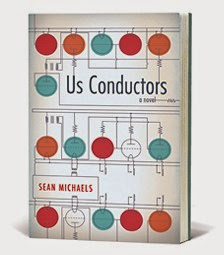 This novel is a fictional biography of Leon Theremin, the Soviet inventor of the musical instrument theremin, and a number of other inventions. The novel consists of two parts – Theremin’s memoirs about two periods of his life, both parts, coincidentally, written in captivity. The first part was written in 1938 during the return (forced) of Theremin from the United States back to the USSR, and the second - in the Soviet sharashka where during the war and postwar years, along with other scientists, Theremin worked for the NKVD. Although Theremin lived a long life (he died only in 1993), this novel covers only a part of his life, mostly related to his beloved Clara Reisenberg.

Success and fame comes to Theremin after the First World War. A young physicist, he worked in St. Petersburg on multiple devices, and then created an unusual and original musical instrument theremin, a complex design that responds to human movement and make sounds. After some practice you can perform classical music on this instrument. The instrument makes a huge impression on everyone, Theremin is even invited to Lenin, where he performs several musical pieces. The scientist and inventor begins to tour within the Soviet Union, gradually perfecting the instrument and doing other developments (including the prototype of a modern TV). In 1928 the scientist moves to the USA to continue his work there, reinforcing his glory and bringing money to the Soviet Union.

Very strange thing this novel is. If you do not pay attention to the writer's name, you can assume that the book was written by a scientist-ex-Gular prisoner, who after the Gulag escaped to the United States, there kearned the language, and wrote this brilliant novel based on other people's stories and the official biography of Theremin. But this novel, who would have though, was written by an American journalist, and not just a journalist, but that man of almost nonexistent profession – a music critic. For a non-immigrant from the USSR, Sean Michaels has a phenomenal eye for detail. Typically, an aspiring author (and for Michaels this is the debut novel) feels very shaky on unfamiliar territory. The book covers very different societies: the birth of the USSR, and jazzy New York, and Kolyma, and closed scientific bureau. And there was a good chance that the American author could slip somewhere. But Michaels hasn’t lost a step.

Of course, someone will be outraged, saying that there are many assumptions in the book. Theremin didn’t know Kung Fu, and he didn’t kill an FBI agent, and much more other things here are distorted and added. However, the reader should understand that Us Conductors is, in the first place, a novel, an invention, as it is called by Michaels, only based on the life of the scientist and inventor. Facts can be distorted, but overall details - there is no falsehood.

There are small mistakes, though. For example, back in the early 30's one of the scientist’s friends calls him «rocket scientist», although the term had not yet appeared at that time. "Black Marusyas" here are called "Black Marias." Michaels politely calls prison snitches informers. Growing up in Russia, Theremin doesn’t yet know what “brusnika” is. In a conversation with the prison authorities Theremin uses as a measure of the length a mile and his superiors don’t correct him.

But all this is stuff that English-speaking readers will not notice. Though the story underlying the novel hardly will leave anyone indifferent. From the outset, the narrator chooses detached tone to his narrative. Yes, he is also the main protagonist, but he seemed to flow through life. He is a talented, successful, sociable, honest, but at the same time gutless and too naive. Having found his love, Theremin doesn’t take actions to win Clara. Generally relationships with women scientists put a stain on the inventor. He married Katya by stupidity, he was young, he says, but almost immediately and broke up with her, not even broke up, just forgot. He tried to win Clara, but it was too late (although he has not lost love for her). He married a black dancer for mercenary motives, and left her, though not by choice.

A lack of will power of the protagonist can be traced throughout the entire novel. After losing his main love, Theremin lost interest in life. Perhaps because of that he relatively easy suffered expulsion, arrest, jail, camp, sharashka. He has survived because of love - and his genius. It is impossible not to admire Theremin: he made many inventions, but he was not particularly proud of them and didn’t have patents. In the United States other people had patents, and his inventions in sharashka was kept as top secret.

For all his life the hero of the novel carried loyalty not only to Clara Reisenberg, but also to Lenin. Meeting with the leader left a mark on the mind of the scientist. For the reader the memories of Lenin may seem ridiculous, but in them we can see all sincerity and inner purity of Theremin. Characteristically, in his memoirs Theremin does not condemn the Soviet government, neither Beria or Stalin. Rather, he remains loyal to the Soviet regime, even after Kolyma. For him, the Soviet Union is not Stalin, it’s still Lenin.

Michaels writes equally captivating about music, camp labor, dancing under the jukebox, testing of new inventions. Us Conductors captures the essence of the XX century through the tragic fate of one scientist. Not every year we read debut novels of such power and brilliancy.