The Gutter and The Grave 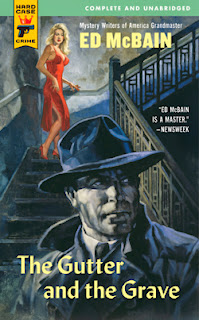 Ed McBain
The Gutter and The Grave

Matt Cordell was a private investigator once. Now he drinks all day, panhandling and sleeping in flophouses. All because of a woman: Cordell found his beautiful wife in bed with his partner, beat his face to a pulp, almost ended up in prison, escaped a conviction with the loss of a private detective license.

An old acquaintance finds swollen and smelly Cordell in one of the parks of New York. Ex-P.I. has not seen his pal for more than five years. Friend, Johnny, asks for help with a small problem at work: in his tailor shop there were thefts from cash register for six months, and Johnny suspects a business partner, Dom Archese. After long persuading, Cordell agrees to help Johnny look into the thefts at the shop, where they find Archese shot to death, and written on the wall with chalk Johnny’s initials “J.B.”. Cordell offers Johnny to surrender to police and become a police chief suspect, and Cordell promises to find the killer and clear Johnny’s name.

I think this is the first novel by McBain, which I read, and I think it will not be the last. McBain, mostly familiar to readers as the author of police procedurals, keeps steadily on private detectives field. How often have you read detective stories where the detective would have been drunk and a bum? Cordell during the investigation partially stays on the wagon, and it is to his own advantage: the detective will find the murderer by the end.

McBain plays by the rules, gradually introducing all the suspects, throwing tips and clues and allowing the reader to figure out the killer. Even though the novel inhabits some cliches and banalities, The Gutter and The Grave reads with gusto. McBain here even parodies the famous trick when beaten detective escapes from the hospital to continue the investigation. It is not clear who every time then pays for the medical bills for these fugitives?

Cordell is a tragic figure himself, and the world of the novel is not particularly bright, nevertheless, McBain adds a few jokes in his novel. In 1958, jokes about Hitler had not yet gone out of fashion.

It’s a great novel from the master of the genre.