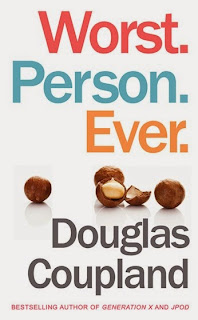 In the center of this story is Raymond Gunt, a middle-aged unemployed camera man, scoundrel, cad, vulgar, raunchy single Londoner. Gunt is loser, but compares himself to Jason Bourne. Well, he only is good at swearing and seeking adventures on his ass.

At the beginning of the novel he is begging his ex-wife Fiona, which he passionately hates, to find him some work. On the way to see her, Ray stumbles upon a smelly bum named Neal, whom Ray insults and kicks him in the shin. Exchanging mucks with Fiona, Ray nevertheless gets the job - to become a B-unit camera man for reality show "Survivor"-like. Casting agency will pay air fare for Ray and his assistant to a small island in the Pacific Ocean, where she show will be made. Gunt just needs to gather his things and find an assistant in one day. Ray is already anticipating how he will seduce attractive show participants on the island.

Our hero has a problem with finding an assistent: Gunt is so disgusting that he has no friends. Nobody wants to communicate with him, and then Ray has an idea to make his slave, as he puts it, a homeless Neal. Ray finds Neal in a cardboard box and offers him a job. Neal coincidentally has a passport and does not mind to spend on the island a few weeks. Ray cleans and washes Neal, and the next morning they leave for the airport.

If Worst. Person. Ever. was planned as a satire, then the idea failed. Attempts to stabs at the reality shows, Americans, British and others find themselves in the shadow of the novel’s hero, who is also antihero, Raymond Gunt. If this is satire, it is not on someone in particular, but on people in general.

But the novel has a life as a kind of idiotic version of The Bourne Ultimatum, since Gunt compares himself to Jason Bourne. Worst. Person. Ever. is nonstop action, and everything that happens defies explanation, so that any spy thriller pales in comparison. Copeland's imagination is sound: by the time the novel gets to the equator, the protagonist hasn’t even made it to the promised island. This is how Copeland hones his plot skills on the scenes in London, in the air and at airports.

What the author shows as well it's his fearlessness and shamelessness. Gunt is not afraid of anyone or anything, with his foul mouth he curses all his eyes see. Children with disabilities, 9/11, homeless, overweight - for Gunt (and Copeland) the are no taboo subjects. Making his protagonist foul-mouthed, it would be foolish not to give free rein to Gunt’s rudeness. He swears at children and parents, does not know elementary decency, does not miss a chance to curse at anything. In a continuous flow of cursing one can even find some charm.

The central character is surrounded also by people far from ideal, among them many lusty as Raymond, and foul-mouthed, as Raymond, but compared to Gunt any of the minor characters will look like an angel.

For such a shaggy story the book has too sudden ending, such as if suddenly Coupland has become tired of finishing the novel, and he put an end to the middle of a paragraph. But novel’s adventures atone for this deficiency.

For all the vulgarity and coarseness the novel has its own charm, and not small, but it lacks, that's really strange to admit, morality. Though it may be strange to expect morality from the novel, where the protagonist washes from his own shit from time to time.

This book is unlikely to teach you something bad, maybe it even makes you feel better. Still, the worst person ever is not you.