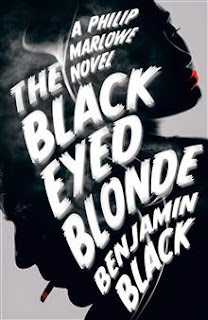 Philip Marlowe still rents a small office in Los Angeles, plays chess with himself and charges twenty-five dollars a day plus expenses. The novel begins roughly where the final Chandler’s novel left off (finished novel, that is). In the office of a private detective comes a leggy lady, black eyed blonde from the title, and asks to find her lover, who disappeared two months ago. Blonde, Clare Cavendish, is a heiress of perfume empire, which her Irish mother owns, is married to a loafer, with whom she has an arrangement: he entertains with his girls, and she has her men, and they do not pry into each other's affairs. Lover, Nico Peterson, was a weasel, always running somewhere, working like an agent or at least trying to pretend that he is an agent. Peterson disappeared two months ago, Cavendish waited for him to show up or call her, but he never showed up.

Marlow, charmed by his new client, takes on the case. Detective finds the address of Peterson and his neighbor, an old man, says he has not seen Nico for several weeks. In the past Nico hosted parties every day, always with the ladies of different appearance, and then suddenly everything has quieted down. The neighbor mentions that two harsh looking Mexicans Peterson also looked for Nico. From his acquaintance from Homicide Bureau Joe Green Marlow suddenly discovers that Nico has been dead for two months, his body has long been cremated. Peterson was hit by a car near the restaurant where he drank all night. Driver was not found, a hat girl identified the body, and the next day in the morgue Nico has been identified by his sister.

Fans of John Banville can ignore this novel as belonging to the lightweight mystery genre (although Chandler is recognized not only as master of the genre, but also as just a master period), but fans of mystery genre may be in the dark about who John Banville is. Banville’s pseudonym Benjamin Black is known on both sides of the ocean, although Black hasn’t earned a special fame among mystery fans.
Banville here has tried to write not just another book about Marlowe, but to link it to the previous ones. The entire novel Banville actively reminds us that the main character is not just some nameless gumshoe, but the legendary Marlowe. Beacons-pointers are scattered around the novel limning it to Chandler novels: Banville mentions all the secondary characters with whom Marlowe crossed paths, from Linda Loring to Terry Lennox. This name-dropping only causes a feeling as if you read fanfic, not a book from master of fiction. Fans of Marlowe without unnecessary reminders will know the contents of the previous adventures of the private detective, but to newcomers these names will not say anything, no matter how many times you repeat them.

Banville mostly writes on his usual high standard, but after all, Chandler himself was always appreciated for his style. On a plot level The Black Eyed Blonde is a solid mystery with elements that Chandler’d use. The problem is that the plot is quite ordinary; not lower but not higher. Chandler himself was criticized for plot holes in his books, but he was good at other elements. Here, the most you will do is shrug, not cry with delight. And it's unfortunate because the plots of Banville’s books are complex and confusing in a good way, much better than the plot of this novel.

I can not say how good Banville imitated the style of the late author, because I read Chandler only in translation. I can see that there is less of humour than it usually was in Chandler’s books. Marlow’s wisecracks are fewer and less successful.

Banville’s Marlowe is more aggressive than Chandler, rougher even, he has something from the modern heroes of mysteries and thrillers. At the same time Marlow here is more literate, he allows himself elegant words and phrases, casually mentioning the works of literature. Chandler's Marlowe could hardly afford it, if only because he seems to be not so educated.

The Black Eyed Blonde delivers in patches, and the finale is frankly disappointing. Banville does not play by the rules: yes, the ending is unexpected, yes, the finale is tied to the previous work of Chandler, but the reader has not a single opportunity to guess the final twist. Chandler would not let himself to cheat.