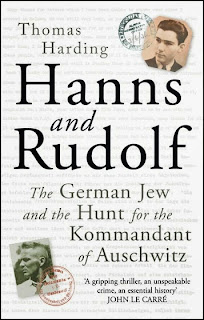 Thomas Harding, grandnephew of Hanns from the book's title, at the funeral of his uncle first finds out that Hanns Alexander was an investigator in the postwar years and hunted fugitive Nazi war criminals. This information became a reason to find out more about the life of his uncle, along with the most famous criminal who Alexander caught - Rudolf Hoss, the commandant of Auschwitz. Harding spent six years gathering information for this book, in which he tells the story of two different people who were born in one country, but fought for different ones.

Hoss was born in the early XX century, was a lonely child, despite the fact that he was not the only vhild in the family. His father planned that Rudolph will become a priest, but the early death of his father violated these plans. Hoss 's widow was left alone on the edge of poverty, and 14-year-old Rudolph, concealing his age, with the help of a friend 's father went off to war. Hoss fought in the First World War, steeled in battle, turned from a modest boy to a man. Hoss was engaged in agriculture, but the spirit of the war was still in him after the war, and soon he enrolled in Freikorps, a volunteer army to suppress uprisings in Latvia. There Hoss restore order in the Baltics region, but soon Latvians themselves turned against the German troops, and Hoss returned home.

Future investigator Hanns Alexander was born in 1917 into a family of Jewish family doctor. The family was rich and could afford a spacious house and a few servants. But the closer the Nazis were to power in the country, the worse life for the family became. The elder sister of Hans went to London where she married, but Dr. Alexander was in no hurry to leave the country. He hoped that the wave of anti-Semitism would die down and all would go back to how it was. But things are not getting any better: the attacks on the synagogue begins, the children had to be transferred to a private Jewish school, but Hanns soon dropped out, working as a clerk in a bank. Being in London with her daughter, the doctor learned about the pogroms in Berlin and only then realized that to stay in Germany is dangerous. With the start of the Olympics repression towards jews somewhat toned down, and at this opportune moment Hanns straightened a visa to travel to England.

Harding writes early in the book that he will call the two heroes by the names, because they both are still human beings (despite that one of them was a cruel killer). Philanthropy and even mercy - traits that Harding has. His story if Hoss’s life lacks moralizing and hatred. Moreover, Harding might even be accuseв by someone of being too soft in relation to the commandant of Auschwitz. Hoss’s memoirs may have influenced Harding’s perception of Hoss. In his memoirs, Hoss shifts the blame on others, indulges in sentimentality, repents, but partially recognizing that he hates Jews not as individuals, but as a race, curses the war and Hitler's ambitions plans.

Such final testimony should never be regarded as upright. Killer always carries with him part, if not the whole, truth. Hoss could be treated as the executive bureaucrat, if only he didn’t before the war brutally killed a man.

More intriguing is another aspect: Harding still managed to show Hoss from the positive side, specifically - as talented manager. Hoss started organization of concentration camps as if he create something absolutely ordinary, as a shoe factory, for example. Hoss treated killing like the planting of fruits, to be effective and yield. This side of Hoss, however, makes it more creepy: he did not kill anybody, did not beat the prisoners, but his rationalism and the desire to be effective for sure resulted in that more people were killed than, as we would say now, with inefficient management.

Hanns is an intriguing person even without the additional angles. Jews usually perceived as a nation of sufferers, whose role is to suffer and die. Hanns turns this theory on its head. As a youngster, he ruined the Nazi meeting, later with persistence was eager to fight against his native country, and after the war did not come back to Germany, betrayal of his country still fresh. Hanns as an investigator, too, was an extraordinary personality. Not having any skills of an investigator he got his way, ensuring the capture of fugitive Nazis. In the post-war chaos reigning Hanns was able to track down the people in hiding.

Hanns and Rudolf is primarily a double portrait, but not a mystery, based on historical events. Specifically investigation process takes not much space. Harding is a good biographer feeling zeitgeist. Though historians have found a few factual errors in the book, they do not spoil the overall impression of the book. Historical non-fiction books like this opens up new, not hackneyed fragments of history. Fresh and accessible.