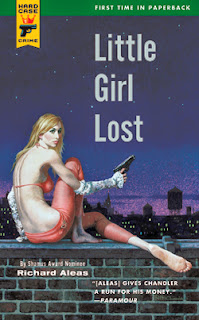 John Blake, a private investigator in a small two man detective agency, accidentally learns about the death of a stripper Miranda Sugarman from the newspaper. Miranda died as a stripper, but when John saw her the last time 10 years ago, she was going to become a doctor studying in one of the colleges in the Midwest. Miranda was Blake’s first love, and he just can not leave her death to the police, which, in turn, unlikely to thoroughly investigate the murder of a stripper in a third-rate bar, given that there are zero clues.

Blake's most interested in how a future doctor could do such a striking way to the bottom of society. Blake begins to delve into the suspicious circumstances of the murder, gradually learning of the lives of the visitors and employees of seediest places in New York.

Aleas’s debut novel was written by the old paperbacks rules, adjusted for the fact that everything is taken serious. Every death is horrible and there is no feeling when you know well: the protagonist somehow will wriggle out of all his problems. A familiar background is here updated with modern technology: Blake uses the Internet and mobile phone.

The second and final novel about Blake a few years ago was rated by me so high that I named it one of the best recent mysteries in the field. Aleas knows how to stun the reader, and the novel’s final twist was so bold so for several days I wasn’t myself, turning the end in my head over and over. Little Girl Lost also offers a powerful finale, which strength is spoiled by some predictability.

The main Aleas’s achievement is the moral growth of his characters, which is very rare in serial books. Even Marlow, from novel to novel, remained unchanged. Blake by the finale is wiser and changes his way of life. And little gitl is lost forever.