The Sudden Arrival of Violence 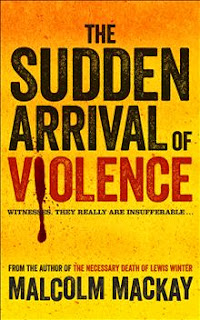 The final part of The Glasgow Trilogy. Former freelance hitman Calum MacLean is now forced to leave his independence. He becomes the main gunman for the criminal organization headed by Peter Jamieson. Calum is not satisfied with the situation, but he can not just stand and get away from his employer. In the criminal business there are special rules and fot hitmen it sounds something like this - death in, death out. Calum can leave the organization only in the casket, though it will not exactly be true: the body of former hitman likely will never be found.

However, MacLean invents his plan of runaway from the organization. After the final hit and killing two persons, the driver for the organization boss and a crooked accountant for a rival gang boss, Calum lays low, knowing that within a week after the job he will not be looked. Calum in minimum time must collect his things, sell his car, and most importantly, buy a fake passport to flee abroad. But Calum’s plan fails.

The Sudden Arrival of Violence’s story has parallels with other hitman novel, The Butcher's Boy. Only Mackay’s gunman is trying to get away from the organization by his own will, Thomas Perry’s unnamed hitman is forced into hiding after the attacks on him by the mafia bosses. Mackay does not stands with one character for long, alternating points of view. Here the widow of the killed driver tries to solve her husband 's disappearance, and persistent detective is entangled in suspects and motives, and Calum’s brother worries for the successful realization of a plan of escape. The novel offers a considerable amount of twists, not letting you feel bored in nearly 400 pages.

This novel closes the trilogy, it is the longest of the three, here the storylines weave most. For all the complexity of the whole picture Mackay offers not so much action. The novel offers Calum’s story how he actually became a gun for sale. And I can not say that McKay gives us a compelling biography.

I can not avoid SPOILERS when discussing another plot turn, used by the author. Mackay seems to violate an unwritten rule, bringing together Calum and Detective Fisher. Calum in a private conversation with Detective confesses to all their murders and talks about the internal works of the criminal organization. It is no secret that the hitmen have cooperated with the police and will be cooperating exchanging their testimony to freedom. There is another type of criminals who flirted with investigators, but never directly admitted to their own crimes. Nevertheless Calum gives his confession, but remains at large. This episode of the meeting of Calum and Fisher rings false. Fisher would hardly leave Calum free. And all Calum’s confessions are not worth a damn.

Mackay in the finale gives his (anti)hero a chance at rehabilitation. Calum plans to live a life on this side of the law, quitinng the contract murders. But this kind of happy ending can be considered as pessimistic ending. Calum, a man without education and no skills, is unlikely to find himself in a free life. Where he will yield and what benefits he can bring to society? Become a seller in the supermarket? Become a sales manager of plastic windows or vacuum cleaners? I think a law-abiding life will be worst punishment for the former killer.

A particular problem of this novel - and in general of the whole trilogy - became the style chosen by the author. In its best moments it is a chopped-up prose, partly energetic, partly melodic. In their worst moments (which there are plenty) it is a set of truisms, half-baked sentences, uttering platitudes.

«Life moved on, but it left a scar. Takes real strength to shrug it off and move straight along.»

«Gumen, for example. For them it could be a matter of life or death. Capture or escape.»

«Tough, surly, but definetely honest. Everyone said so. Got a hard-on for gangland stuff. Just because people think he's honest, doesn't mean he is.»

Sometimes it seems that the author passed the rough drafts of novels to the publisher, not the novels themselves.

The whole trilogy is pretty good read, where the best of the three is perhaps the second novel. The Glasgow Trilogy is worth reading, but you wouldn’t kill for it.