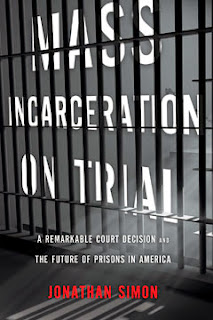 America worries about its citizens. America wants to reduce crime, separating those who have comitted crime from those who are victims or can become victims. The method of the separation the US have chosen is imprisonment everyone who poses even a slightest threat to society.

Mass incarceration has become panacea for all crime related illnesses in America. Prisons lose their rehabilitation status, turning into human warehouses storing people as objects that have lost all their value for the government.

Jonathan Simon in his study of mass incarceration writes that the society and then government views on crime and crime prevention toward incapacitation changed their views on prisons significantly only recently. On an example of California, Simon shows how a state with moderately small amount of prisons during only two decades had made a big step forward to a prison state, where “more than twenty new prisons [were built] during 1980s and 1990s”. The state abandoned all rehabilitation programs for prisoners, adapted new harsh sentensing laws, made parole impossible, with the only solution in mind – incarceration. The newly builded prisons couldn’t catch up with the number of newly convicted, who received long sentences even for smaller crimes. It had led to overcrowding in prisons, that itself had become the source of another issue for prison inmates. The conditions of their imprisonment worsened. While the official theory was that prisons are safe for those who are unsafe to society, in real life prisoners suffered from absence of elemental medical treatment. The prisons became places of torture tucked away from our eyes.

Examining new trial cases, regarding mass incarceration and prisons conditions unfeat for any human, especially those who suffer from mental and chronic illnesses, Simon find the reasons as to why California and the rest of America found this brutal and most unhuman way to treat persons who were found guilty of comitting a crime. I avoided in the previous sentence the notion that state found a new way to prevent crime by building new prisons. In this book Simon (and he’s not the first) argues that it’s been established already that there is no direct relevance between crime rate and incarceration rate.

Thus we should regard the reasons that caused and started mass incarceration across USA. In one of the strongest arguments Simon explains how society viewed an ordinary criminal, the two most common types being black violent revolutioner and white serial killer hunting in suburbs. It seemed there were no other way to be saved from crime, other than to place every person who committed any crime possible in prison for the longest term possible. Simon convincingly argues that it is the government itself who sold the society this idea about incorrigable criminals, and then after society in fear changed its views toward the need of a harsher punishment, the government simply used society’s approval of mass incarceration.

Building prisons is the simplest way out, also being not the cheapest one. Mass incarceration requires minimum brain work, as prisoners are treated as things that are needed to be placed inside cells, and then forget about them, for life if possible. Rehabilitation, working with people, treating human beings with dignity they’re entitled to, this is a hard work. Government “treat(s) members of the human race as nonhumans, as objects to be toyed with and discarded”. For a few decades government was focused on the materialistic side of the problem, being interested in contruction, safety inside of prisons for prison officials, supermax blocks and whole prisons.

Simon slightly touches one, as it seems for me, important point: the new prisons were considered as safe places for work of prison officials in the first place, and only in the second as a safe place for prisoners. Prison officials viewed prisoners as dangerous species, animals who deserved to be treated as such. Therefore all in prisons was made so that prison officials could feel and work safely inside prison walls.

While completely forgotten and deprived of decent medical treatment and opportunities for education, communication and rehabilitation, prisoners struggled all these years. The prison population grew, the average age of prisoners raised, the suicide rate among prisoners high as ever, and only recent litigation cases drew attention of media and social scientists to the issue of total incapacitation.

Simon delves into three most important cases, where whole population of several Califotnia prisons demanded the right to medical treatment and human conditions in prisons. During these cases, it was found that mass incarceration leads to a violation of Eighth Amendment. The Brown vs. Plaza court’s recommendations on reducing prison population is only a start. The three cases examined in this book initiated the end of mass incarceration. The government still fights this decision, yet there were some progress already made.

Mass Incarceration on Trial is a superb study of American penal system, its issues and the possible ways to solve them. It a book for prison freaks and for those who studies law.