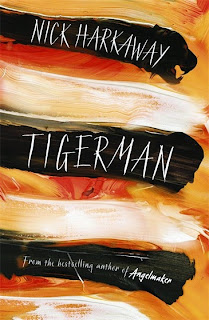 “ON THE STEPS of the old mission house, the Sergeant sat with the boy who called himself Robin, and watched a pigeon being swallowed by a pelican.”

The Sergeant himself is on his way to become a local Batman, who as one would have guessed from the title, will be called Tigerman. The boy will remain the boy, though the Sergeant will find a name for him closer to the end of the novel. As a pair, the Sergeant and the boy fight evil of a undefined type, since the source of evil is often uncleared, as it often is if it’s a matter of global politics where good and evil not easily recognizable. As just local people, and on the island of Mancreu everyone is local and alien from somewhere else, the Sergeant and the boy are hardly in need of names. They remain symbols, of a wanderer, wounded and faithful to the Crown, being an army vet, semi-retired, and of a child in need of a proper parent, or so it seems.

The heroes are introduced at the beginning, and the place also plays a significant role in the book. Mancreu has no proper government, being a former colony in post-colonial time when it already doesn’t matter who governs whom. “In theory, of course, the British presence here had been withdrawn three years ago, claims of sovereignty having been yielded to the NATO and Allied Protection Force on Mancreu, NatProMan.” The Sergeant serves here a role of an observer, and there is nothing really to observe, except to keep your routine, eat, talk with the boy. The Sergeant is in position when he just needs to do nothing until the island is liquidated, and the rumors going from the start of the novel have it that the island will be eventually destroyed. There will come Leaving time, and one just ups and goes home.

The official reason for destroying Mancreu is its dangerousness to the rest of the world. The island has mutant bacteria somewhere around it, and it needs being stopped from potential future spreading. While the island is still functioning (and no one asks locals whether they want their home demolished), it remains a strange and lawless place, where shady deals are going. And soon the Sergeant finds himself first in the role of a country detective, and then of Tigerman.

It can seem that the fantastic element of Tigerman masks behind not so fantastic theory about dangerous island. This element is obscured by the rest not so fantastic stuff. In fact, Tigerman reads like a work of fantastic genre. Superhero fights and mysterious women, known only by name legendary villain are all part of the atmosphere, and this unforgettable atmosphere makes it read like an adventerous novel with fantastic elements inside. It is enormously entertaining, remaining thoughtful and heartbreaking. Bat(Tiger)man on an aboriginal island saves the world, with a touch of international intrigue, what else do you need?

It is not all BANG and BING, though. Harkaway is pretty realistic in depicting so called Third World problems. And the tension between a grown man imagining himself as a father and a boy in need to be fathered and their shyness about their thoughts and emotions on that create careful examinations of human feelings. The novel asks, are adult and child equal in their bond, or is it always unbalanced relationship? Who manipulates whom?

Prepare yourself for a wild ride. It’s one of the most poignant SF books I’ve read in years.