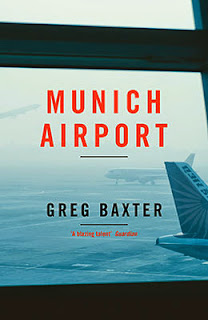 Three people expect a delayed due to fog flight from Munich Airport. The death of the fourth one unites them – it’s a young woman, Miriam, whose body should be delivered on a commercial flight for burial in London.

The unnamed narrator of this story is the brother of Miriam. The other two is the narrator's elderly father and Trish, a black woman, consular officer from the U.S. Embassy in Germany. Delay at the airport is the final stage of a three-week waiting in Germany. Because of the German bureaucracy and thoroughness the body of the deceased could not be released to relatives sooner.
Chronologically, the novel’s action fits in a day at the airport, but thanks to the flashbacks and memories of the narrator we follow the fates of all four characters, including Miriam, although her story remains a mystery.

The narrator is a divorced American expat living in London. After several years working for a corporation as a marketing manager the narrator resignes that coincides in time with his divorce. Given up on the search for a new job, he founded his own company, which includes only himself. He begins freelancing as a marketing specialist. Now, stuck in Germany, he is forced to postpone all his work.

Despite the location and the novel’s title (actually, Munich Airport), the book is not an airport or airplane reading. Baxter’s novel is not one of those that is read in a three-hour sitting to pass the time. Baxter writes physiological prose, can convey infirm feelings and moods, and who would want to read about, say, nausea before his or her flight?

The atmosphere in the novel is very heavy, there is a full feeling of hopelessness, and it even seems like the heroes in the end won’t fly away (finally) wherever they want, and break out of the local hell, but quite the opposite - will fly to hell. The narrator has no idea what he will do after Munich, he has no intentions to restore the normal course of his life. It seems that his weakness and nausea would stay with him until the end of his life. Sickness is caused, however, not by the airport itself or the people at the airport, rather by the entire life of the hero. He’s gnawed by the feeling that he did not help his sister, that he is not close with his father, that he’s lonely in life, and his existence is joyless throughout.

Hopelessness gradually spreads to people around the narrator. His father also seemed to lose the will to live, and Trish is lonely and unhappy (this also indicates that she completely gives herself fully to the two lost souls, rather than does her own things these three weeks).

Action of Munich Airport takes place in Germany not without a reason. Baxter is not commercial writer, of course, his prose is much more serious, and stylistically just goes to the German prose of the last century (Thomas Bernhard etc): the novel is written without division into chapters, as one continuous text, and paragraphs here are a rare thing. What looks like a dispassionate prose, it packed with a lot of feelings and passions, just the general mood of the narrator sets off everything else. Baxter plays with the form as a whole, but he doesn’t experiment with a sentence.

This is a well-written novel, well worth reading, and as for depression, you should understand the hero, his sister died, the future is quite dark, where is something to be happy about then?