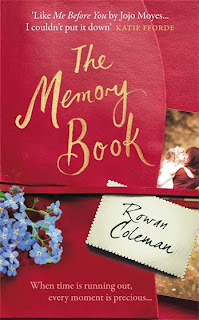 Claire is the main protagonist of this novel. She is in her early forties, she is the mother of two daughters, married to a man younger than herself. Claire has everything to enjoy in life, if not for one major obstacle – her Alzheimer's disease transmitted genetically from her father and rapidly progressing.

Claire even before diagnosis knows that something is wrong. She could forget a word, put somewhere something and doesn’t find it later, could forget what she was doing a moment earlier. Claire knew that her chances of getting Alzheimer's is 50:50, but she hoped that the disease will pass, or at least postpone its arrival until the old age.

At the beginning of the novel we read the scene where Claire meets her future husband, Greg. He repaired the roof of Claire’s house, at the time a single woman with a teenager daughter, and when Claire could not remember where she put the money to give Greg for the job, Greg called her out on a date. Acquaintance grew into something more, the relationship became serious, and Claire, who before Greg rarely dated men, decided to get married. Marriage with Greg became for her also psychological prop: finding love in adulthood, Claire hoped that it will help her chances of fighting the disease that has not yet come.

But this does not happen.

This book can be criricized and can be praised, but it is intended for one target audience - women of a certain age. The Memory Book is not conceived to win the hearts of wide and disparate target audience, it just does not have the material. A person reading this novel who is not a target audience probably will finish reading after 40 pages and throw the book in the trash.

The novel definetely offers a comfortable reading, without any real life worries and with moderate intrigue. Coleman follows the trend: if novels about Alzheimer's are in trend, why not write another one like this? The author changes narrative angles, switching between four characters, but mostly it is first-person narration from POV of mother and daughter, Claire and Caitlin.

The idea of a memory book is not too new, and this idea is impleneted here so so. It gives us the opportunity to visit the characters’s past, but these excerpts from memory book are written too artificial, too artistic, as if all family members have graduated with degree in philology.

As such, there is no conflict in the book. But there are several semi-conflicts. For example, in the novel there is a small possibility that Claire will be sent to a special hospital, but relatives in the future do not even consider this option. Caitlin’s pregnancy is associated with the conflict "save or not the child?" But again everyone is happily together, and the conflict disappears. Throughout the novel something threatens Claire’s life because of her failing health, but each risk evaporates either by itself, or with Claire’s relatives’ will. We know Claire’s diagnosis from the beginning, so do not count on unexpected development of events.

The only surprise of the book, a personality of a stranger Ryan, holds on a very large assumption. And in general memory lapses happen to the main character's convenience, and only then when it is necessary to advance the plot in the right direction.

On the posotove side is that the book can be read in two sittings. The author’s style is purely serviceable, it helps to push forward an unpretentious story.

The Memory Book offers love at first sight, family love, sleek style and is conflict-free. The Memory Book will not remain in memory, but someone will enjoy it devouring within a couple of evenings.