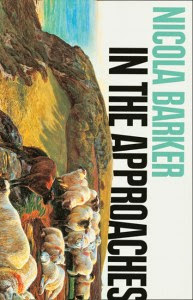 Nicola Barker
In the Approaches

The action of this novel with a truly foggy plot takes place in 1984, in a small town Pett Level, near Hastings. There on the beach a young woman Miss Carla Khan rent a cottage for tourists. One of these tourists is a journalist of sorts Mr. Franklin Huff, registered under an assumed name.

Huff actually arrived on the coast not for leisure but to conduct an investigation.

Huff once lived and worked in the U.S., carried out important trips to South America, covered the violence in Mexico in the 60s, received threats from the CIA. Eventually Huff flew to London, and was unable to return because Americans banned him from entering the country.

Huff had a wife, Kimberly, also a journalist, whom he had met long ago, lived with her for a while, and then they broke up, but weren’t officially divorced. Huff met another woman, and lived with her, and she also died. Kimberly after one accident suffered severe burns, lost almost all the skin on the face, with they kept in touch with Huff and even wanted to work together on a book. But then Kimberly died and Huff remained absolutely with no money, only with the job, which his wife asked him to do. Huff has some photos, though what on them in the beginning of the book is not entirely clear.

Huff and Carla slowly but surely fall in love.

This brief plot synopsis might give you the impression that the plot of the book is quite clear and simple. This, however, is not so. Despite the seeming simplicity – don’t you think we haven’t read enough sea side love stories? - the plot of the book is so vague and hidden behind Barker’s verbosity that even after reading it to the end, when seemingly all secrets must be revealed, half of what one has read only vaguely fits into the plot outline. In the course of reading you will be often puzzled.

Distilled from the author’s stylistic refinements, the bottom line of a plot would have been a banal romantic comedy, and the novel in that case, of course, would not represent any interest to the reader. In the Approaches in the form in which it now exists, is essentially a romantic comedy, as well as many more than just that. Barker remains true to herself: simple stories she tells with a difficult language, has the ability to prolong and overdo, for the protagonists she chooses eccentrics, necessarily changing narrators in each chapter. All characters in the book speak as if they were actors in amateur theater, rehearsing their roles. First person narrative is such an emotional stream of consciousness, with sighs, oohs, with italics and capital letters. People don’t speak like that, of course, and yet dialogues delivers certain pleasure.

Barker without shyness here is experimenting with language and characters, chapters written from the parrot’s point of view alone are worth reading. The author definitely mocks reader and enjoys writing, perhaps even to the detriment of the reader. While reading the book is important not to worry, that nothing is clear, get into a rhythm and do not rush things. Because the events themselves will not hurry: the book’s 500 pages read without a yawn or urges to sleep. Barker writes funny enough. Situational humor (particularly the scene in the sauna) here is fighting on equal terms with phililogical humor.

In the Approaches does not offer easy reading, even will make you sweat, but it brings great satisfaction.