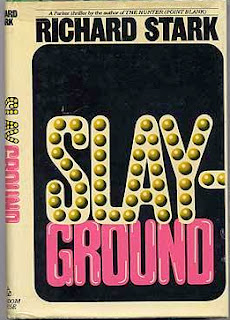 Parker in the company of company Grofield and second-rate driver Laufman knock out armored car on a deserted road, but when they try to getaway Laufman rolls the car into the fence. Parker is the only one who does not lose consciousness, and he gets out of the car with a bag of money. Police are coming and there is absolutely nowhere to hide - except for Fun Island, an amusement park, closed for the winter. Parker climbs over the wall, hoping to get out later through another exit when a hype around the armored car slows down. Parker does not yet know that there is no way out of the park, and worse than that: Parker and a satchel of money were seen by two mobsters who met with two patrol cops to for the pay-off. And mobsters and cops will want to get this bag.

Those familiar with the previous books in the series about Parker without my recommendations know that you should read Stark, preferably starting with the first book of the series The Hunter. Slayground is rightly considered one of the best books by Stark, largely because Parker here is in an almost hopeless situation (though isn’t he always?). Never before Parker was not in the truest sense cornered where there is no exit. Moreover, by the middle of the novel Parker is left without his favorite weapon – a gun. But Parker, of course, is not one of those who surrender.

Slayground offers not only entertainment for a few hours, but makes fans of the series to ask several questions about the central character, Parker. I was curious, if Parker did not see any options to get out of the situation, would he choose to surrender to police, given that he is wanted for a couple of murders, or he would prefer death in a shootout?

Another issue worrying me in the course of reading can be formulated as follows: how this professional thief is always in a good shape, if he does not play any sports, doesn’t work out, does not go to the gym and spends his free time (or spent up to a certain time) on the beach sunbathing and sipping cocktails? It’s impossible to imagine Parker playing basketball with the company or in the gym lifting weights. The only exercise Parker makes when he comes to jobs, but it does not happen too often. Without the stunning physical form Parker just would not be able to do all that he did in the novel.