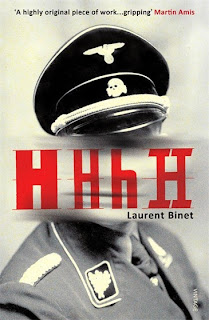 Unnamed narrator of this novel - a writer, like Laurent Binet himself - aims to tell the story of the attempted assassination of SS General Reinhard Heydrich in Prague in May 1942. A detailed account of not only attempt, but generally the events leading up to the assassination, Binet will tell in an unconventional manner, avoiding any kind of artistic assumptions, weaving into the novel facts in the encyclopedia style, talking about gathering information about Heydrich and sharing his impressions about other artistic works in film and literature describing Prague assassination attempt.

From the very beginning of the novel we know the names of two men from the Resistance Army, Joseph Gabčík and Jan Kubis, one Czech, one Slovak, who attempted to kill the Nazi leader. There is almost nothing that is known about them.

Plan to assassinate Heydrich is formed not immediately, and for several years the soldiers learned, trained, ready at any moment after the president in exile command (another president, loyal to Germany, was appointed after the entry of Germany into the territory of Czechoslovakia, also divided into two states).

The narrator knows much more about Heydrich. Frustrated musician, he served in the Navy, where he was expelled after the incident with a girl. Heydrich began dating the daughter of a Nazi, and she advised Heydrich to join the party. The Nazis couldn’t not take a capable military officer, which soon became the head of the secret service of the Gestapo, whose function was to collect information about everything and everyone. Heydrich gets thousands files which includes the smallest facts. For spying on high rank party members, he sets up a public house, equipped with microphones. Heydrich becomes close to Hitler's entourage, removing people unwanted by Fuhrer.

Binet early in the novel says that he would like to avoid fiction, sticking to the facts. In this statement there is as much as wickedness, as courage. Writer’s imagination still remains there, otherwise Binet would write a study, non-fiction, which is likely to have been written by a fair amount of writers before, but not a novel. Writer as storyteller is still here, but it’s his functions that changed.

Instead of fictional dialogues the author interweaves in the book his girlfriends (maybe they’re fictional); Binet does not skimp on historical anecdotes (including one about football); plays with the form by inserting into the novel fragments of newspaper articles. The author can not withdraw from the novel, the author is a novel, or vice versa.

Adhering to the historical truth and not wanting to come up and even think out, Binet still has to play by the laws of the novel. If even a fictional character's name is unacceptable for Binet, what to speak of intrigue or composition. But intrigue and composition are not missing in HHhH. For example, in the beginning of the book the narrator mentions “a Sten submachine gun”, pointing out at its unreliability. The narrator asks to remember this moment, and that intrigues the reader. And in fact, in the most dramatic scene of the book a Sten will play a key role. And the author\storyteller who it seens should to be cool, once he so adheres to the accuracy, can not restrain himself, cursing at the gun. This emotional breakdown of the author (such breakdowns are not one and not two there) evokes emotion in the reader, too.

As a work of fiction, HHhH is a fascinating read, rich with facts, devotional to historical accuracy. Based on a true story the plot makes you flipping through the pages.

But we must be aware that most of the book is devoted to not Czechoslovak heroes, but to the Nazi leader. There is a shift in emphasis, from the protagonists to the villain, but it is a history bobble, not author’s: there is a lot more information about Heydrich than about Gabčík, Kubis and others.

One must also keep in mind that this novel is full of antics, half-anecdotes, and some author’s attempts to be clever on the background of extremely serious topics such as the Holocaust. And when one page describes how a concentration camp is set up and a practice of killing of thousands of people, and on the other the author almost is picking his nose – let’s say, not everyone may like it. And someone may even call the author vulgar.

Translation from French here is on the brilliant level, among my complaints only a couple of Britanisms and a name Natasha, which in the novel mutilated into Natacha.

HHhH is a bold and experimental novel, well worth reading.