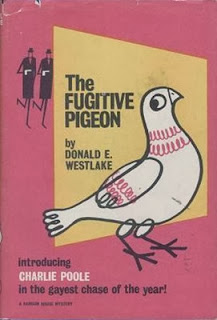 Charlie Poole is the only employee of the bar Rockaway Grill in Brooklyn. Bar brings losses, Charlie pretends to work. But it is how it should be: Charlie is a nephew of a small time hood in a criminal organization, which keeps the bar as a cover for illegal transactions. From time to time, Charlie sends and receives packages and messages from mysterious people, but does not ask questions, as long as he has this job. Uncle Al has rescued his nephew from oblivion by giving him a job of bartender in a small bar.

Everything changes for Charlie, when one evening before closing time two hitmen from the organization come in the bar and show Charlie a black mark. Charlie yet escapes from them, looking for answers from his uncle. Uncle avoids the nephew, and Poole has to hide around New York looking for an answer to the question why someone wants to kill him.

It is believed that The Fugitive Pigeon is the first Westlake’s comic novel under his own name after five hardboiled thrillers. The book is really lighter and funnier than the earlier books, but at the same time not quite so full of comedy - on Killy and Mercenaries I laughed not less.

If we draw an analogy, then The Fugitive Pigeon is such a mixture of The Hunter + The Outfit by Stark with Mercenaries by Westlake himself. Elements of the author’s previous novels are all here. One man goes against the Mafia, while solving whodunnit (and Charlie plunges into murder). Pool is not Parker, but their methods are almost the same. Both use the most direct ways, both with gun drawn. However, Charlie should learn how to use a gun from Parker.

The Fugitive Pigeon is a smart book, not Westlake’s best, but extremely exciting.