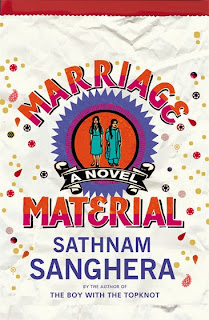 The novel tells the story of three generations of a family, which emigrated from India in the mid-60s. The story from today is told by 35-year-old Arjan Banga, whose grandfather moved his Punjabi family from India to a small British town of Wolverhampton. Head of the family, Mr. Bains himself first moved to England, and when he was settled, he moved his wife and two daughters Kamaljit and Surinder.

To a job in a factory Bains prefer to keep his own shop, which is inherited and passed to Arjan.

At present our narrator became moderately successful graphic designer, settled in London, found a partner, a white girl Freya, and already engaged to her. The wedding is scheduled for December, as Arjan’s father died suddenly from, as police puts it, natural causes.

After his father's funeral store Arjan runs the store along with his mother Kamaljit. Death of the shop’s owner happens exactly at the time of the London riots, spreading later across the country. The shop is temporarily closed and Arjan realizes that his mother is old and alonr, she can’t manage and protect the shop. But this shop is all that his mother has, and she never agrees to sell it. Arjan, too, doesn’t want to, becuae the shop is a kind of a family heirloom.

After Freya offers to put Kamaljit in an apartment complex for the elderly, Arjan has a quarrel with the bride and goes to Wolverhampton. At work, he is given a six-month leave, and Arjan's back where he once ran away from.

Together with Kamaljit he runs the shop, they took turns behind the counter, manage the stock, although the shop brings a small profit. Arjan is daily faced with racism on the part of buyers, even once grabbing a mop - to fight back a violent buyer.

Despite its title, Marriage Material is far from the average romance novel. And to be quite accurate, it is not romance novel at all but high-quality contemporary prose – marriages included.
There are several marriages in the novel, but the main one would not happen. Arjat will break an engagement, cancel the wedding and the epilogue will leave us guessing. But it will be possible to compare the marriages that occurred and that didn’t.

The present story becomes clearer and clearer on the background of the past, stories of two sisters. Sanger asks: have a lot of things changed there? Marriage to a white girl is not considered a crime within the family anymore, castes is a thing of the past, Asians already can drink, smoke and, as well as to engage in sexual relations before marriage.

Arjan on the example of his fate shows that Asian community no longer holds one who wants to escape. And even if the parents object to your choice, no one will stop you. But the increase in freedom does not remove all the problems. Racism still remains, caste is transformed into shackles of family business, brains are still valued less than diligence and obedience.

Both storylines are spiced with humor, of course, Asian one. Arjan in his narrative presents himself as an object of ridicule, also sneering Asians and parodying the gangster image of his rival. In the plotline of the past humor is there thanks to Surinder’s naivety, smart girl who had been a victim of a sleaze talker.

Sanghera writes clever prose interspersed with sentimentality, but without the melodrama. His observation of the Asian way of life is shrill and accurate. Sanghera is able to mask the details: the death of Arjan’s father at the beginning of the novel is quickly forgotten, but then cleverly played up.

Smooth style helps no less smooth plot, quite intense, although quite predictable. In the afterword, the author writes that the storyline about two sisters is a remix of the early XX century novel. This does not affect the perception of the novel, and sometimes remix is better than the original.