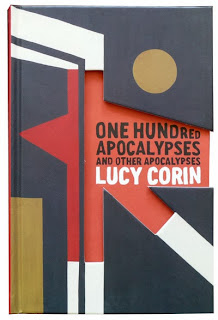 Usually an apocalypse is perceived as something ending, BOOM! - and there is nothing. In speculative fiction even subgenre of post apocalyptic fiction has been formed when the action is happening in the world after the apocalypse, the phenomenon, affecting everything and everyone, often leading to irreversible consequences.

This collection really contains more than a hundred apocalypses, short stories (the book opens with three long novelettes), where the end of the world happens. Here apocalypses are continuing phenomenon, which flows one into the other and so on without stopping. It is understood that Lucy Corin is not trying to come up with more than a hundred variants of apocalypse. Apocalypses in her stories are often phenomenon that is purely private, invisible shift, off-screen act, the error in the world order. Apocalypses in this book are almost like the pulse of the earth under our feet, almost non-existent.

One Hundred Apocalypses and Other Apocalypses is a broken mirror, whose fragments you are trying to see yourself in. Corin fascinates us with her stories, which are baffling, puzzling, and makes us to listen to every word. This collection is hard to read in large portions: the stories are not linked, and a lot of the stories absorbed at once will make you dizzy physically.

«In my town, where we live on a hill in the desert which was a desert even before this last apocalypse, I can stand on the wall surrounding the house and look down with binoculars. Tonight there is a famous rock band in the ball park. Everyone left is watching them hook up their amplifiers to some car batteries they found. The band is in leather outfits, just like the old days, like nothing happened, except now they don't have roadies.»

This is a fragment of the story «Hot Ticket». Corin has practical style, with a touch of melodism. It's not prose in verses, but like poetry, it allows multiple interpretations. The narrator says that they live on a hill - in the open air or in the houses, and if the houses, are thay the old or newly built ones? The second part of the sentense inclines to the second version, although it is unknown whether it is a home for all or only for a few of them. «This last apocalypse» suggests that apocalypse in the world of this story is not an uncommon phenomenon, but they happened, and people remain. Rock band means that after the apocalypse people still find the time and opportunity for entertainment. But the fame of a group again raises the question whether this group became popular after the apocalypse or was known in before apocalypse times? Lack of roadies means only that the group is probably not touring - no opportunities to move around the continent?

Almost every story in the collection you can disassemble like that 24\7 , and in this the brilliance of this small volume book lays. Among the novellettes «Madmen» stands out, an incredibly strange story about a girl who, having reached 14th birthday, travels with her parents in the hospital for the mentally ill, there to pick herself a madman. In this world, all adolescents should acquire madmen that help adolescents to further adapt to the world.

This book is hardly for fans of genre post apocalyptic fiction, that much it is original and doesn’t look like anything else. I should also mention the book design: for a long time I have not seen so beautifully published book.