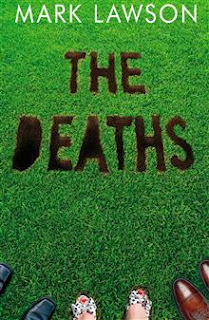 Four families live in the fictional Middlebury in homes in the suburbs, which were built for the aristocracy. They call themselves The Eight, mainly communicate only among themselves and goes to London only to the airport and commute on train to work.

Men of the family all work, and among their wives work only two. Max is a tycoon, always doing business. Johnny is a prosperous lawyer, Tom is a security expert, and Simon is a PR manager of a bank. His wife Tasha runs a catering company, and Tom's wife Emily is a doctor, a specialist in chronic diseases. Max's second wife (he is 56, she is much younger) Jenno sometimes teaches courses and gives advice to families on reducing costs, and Johnny's wife Libby mostly is busy shopping and discussing of au pairs.

The novel, in fact, opens with the deaths from the title. Courier of coffee in containers delivers coffee to one of the houses where he sees a family shot to death, wife and children, as well as dogs. Victims of mass killings are from one of the above families, but Lawson before the end will keep in secret, who were killed and who killed them.

And if the main plot line will explain in a meticulous manner the life of The Eight, the secondary storyline will focus on the police investigation. There is very little to investigate, and the detectives just wander around the murder scene, discussing the murdered family.

Four families are seen in their daily lives, and with each chapter husbands and their wives become more disgusting and repulsive. The main storyline begins with the description of men on the train London. They all are late for work when the train suddenly stops and an announcement explains that someome threw himself under the trainand the train can’t go any further, and the four men are even not surprised with this: suicides like that happen on English railroads every week. The men are only annoyed, but they do not feel any sympathy to a suicide victim: they think they will never fall that low.

Lawson, like a real surgeon, dissects the top layer of British society: he stabs and cuts, sews and cuts up, exposing the insides – people’s vices. He is amazing surgeon, but he just gives too much anesthesia. He forgot to check if the reader feels anything.

The problem with this novel lies not in the fact that the characters are all unsympathetic, as we have seen even more vile, but that Lawson is not particularly empathetic to his own creations. And if the author doesn’t care, what to expect from the reader?

If we discard the murders, which is not only bait for the story, but also a way to show that there is a punishment for sins, the plot of the novel is compressed into a parade of little connected scenes of everyday life of the wealthy. Lawson spins his characters, exposing all their imperfections. Work, leisure, sex, church, holiday, day-to-day life - Lawson just can not stop. He throws out the details, going from one family to another. He tells hurriedly, as if afraid to stop. It is not surprising that the novel has grown to such a volume.

No doubt, the author is witty, has a keen eye, can make you laugh. He seemed to doubt his own abilities: making their characters vile, Lawson can not stop, as if considering that we did not see enough how disgusting all the characters were.

If you do not belong to their circle and their social status, you are nobody. But why, then, even to the 400th page you hardly recall who is who in this book, and who married to whom? Where is the humanity to his own creations? He is interested to look at them under a microscope, but the characters from the book after closer look remain types.

Those readers who expect from The Deaths complicated police investigation will be disappointed. Murder plot line is only auxiliary, giving no surprises.

Lawson is sure talented, but in this book even those characters that remained alive turned out lifeless.