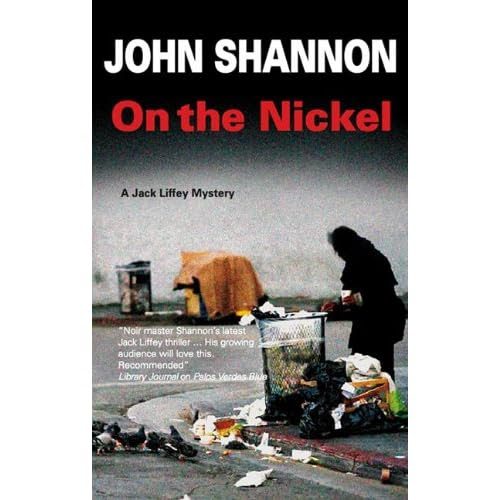 John Shannon
On the Nickel

Private detective Jack Liffey (the hero of a series of novels) after the prior case is confined to a wheelchair, having lost the gift of speech. Liffey’s friend calls for help, asking to find the fugitive 16-year-old son Conor Lewis. Daughter of the PI Maeve, unbeknownst to his father, takes up the case, playing a young sleuth. The investigation leads her to the Los Angeles area, the Nickel. Soon Maeve herself disappears, walking into the trouble. Liffey himself and his wife, Gloria Ramirez, a policeman, go to save Maeve and runaway youngster Conor.

The novel’s interest lays in that we see the mechanism of slums of Los Angeles. Developers (aka half-gangsters) want to take more and more land. Homeless people live in half-ruins. There even shoes will be stolen from invalid. Small gangsters show persistence and perseverance in the small business. And in this festering sore on the body of Los Angeles a young man who dreams of becoming a musician and a girl who dreams of becoming a detective get there, and he and she both are from good families. Shannon illustrates Nickel’s life not only by the plot twists and individual characters, who live here, but also the statistics at the end of each chapter.

«On the Nickel» is a book for young adults, pretending to be a book for adults. The main characters are maturing children, not Liffey and his wife. Maeve and Conor must fend their lives for themselves, and Liffey comes to the rescue closer to the final, becoming deux ex machina.

Teens will read a book with a great pleasure, adults will be confused by this book.
Автор: Ray Garraty на 12:49 PM